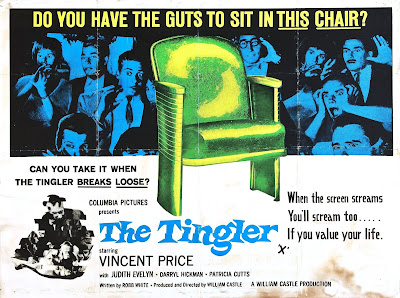 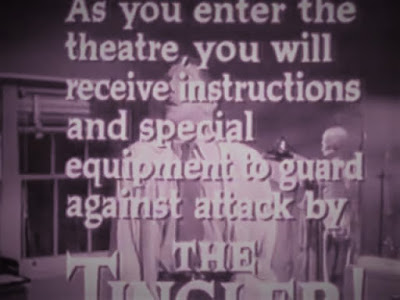 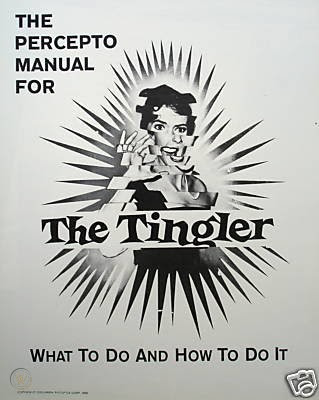 Can You Take PERCEPTO?

BRING YOUR DATE AND WATCH HER TINGLE!
SEE
The screen's first
BLOOD BATH IN COLOR!

"Percepto!" was a gimmick whereby electrical "buzzers" were attached to the underside of some seats in theaters where The Tingler was screened. The buzzers were small World War II surplus airplane wing de-icing motors. This vibrating device was activated with the onscreen action.

Read more »
Posted by Chris Christopoulos at 23:39 No comments: 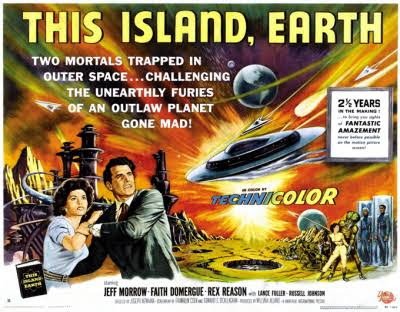 The 1955 sci-fi classic film, This island Earth is based on the novel of the same name by Raymond F. Jones which was originally published as three novelettes in the magazine Thrilling Wonder Stories: "The Alien Machine" (June 1949), "The Shroud of Secrecy" (December 1949), and "The Greater Conflict" (February 1950) 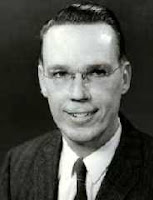 In the story, a race of aliens have set about recruiting human beings for a group called "Peace Engineers" as part of their scheme to use Earth as a pawn in an intergalactic war between the Llanna and the Guarra. Both the movie and the book proceed along similar lines until they diverge quite considerably about half way through.

Compare and see which treatment you prefer! 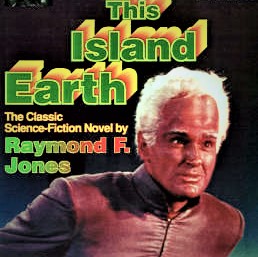 Posted by Chris Christopoulos at 22:07 No comments: 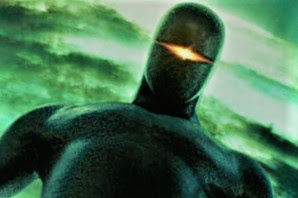 "Farewell to the Master" is a science fiction short story by American writer Harry Bates. The story was first published in the October 1940 issue of Astounding Science Fiction. The 1951 classic science fiction film, The Day the Earth Stood Still (which is featured on this blog) was loosely based on this story. 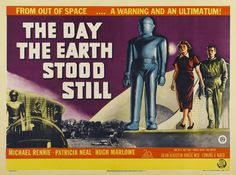 
Both the story and the film are quite dissimilar. In Bates’ story, the events are told from the viewpoint of Cliff Sutherland, a free-lance picture reporter and concerns the sudden appearance of a mysterious "curving ovoid" ship on the grounds of the United States Capitol in Washington, D.C.

As in the film version, two "visitors from the Unknown" emerge from the craft: one an 8-foot tall robot called “Gnut” made of green metal, and the other a being called “Klaatu.” You can find out what happens next in this story by downloading the epub version of Farewell To The Master.

Check out the Classic Sci Fi Double Feature Page which for this session features two back-to-back films from 1955:


Head off to the Classic Sci-Fi Radio Page where you’ll find a link to a classic radio play adapted from the Doctor Who TV series. This one features the second doctor in "Tomb Of The Cybermen" from 1967.


Posted by Chris Christopoulos at 23:06 No comments:

In my recent posts, from the “Sci-Fi Future Is Here & Now” series, Surveillance Society Sneaks Into Our Lives & Facing Up To The Future – Now, I outlined some recent examples of the introduction of surveillance technologies and the implications they have for all of us. It seems that we are continuing to sleepwalk our way into a future of increasing acceptance of widespread and pervasive surveillance, along with the further diminution of our personal freedoms and privacy.

Take for instance the Australian Federal government’s facilitation of the introduction of Facial recognition technology into Australian schools.

Globally, we already have students in China being required to have their faces scanned before being admitted to their schools. In the United States cameras keep a watchful eye over classrooms.

Here in Australia, five schools have been trialing a pilot system to mark students attendance which has started to set alarm (school?) bells ringing. “Looplearn's” system (trialed at Clarendon College in Victoria) scans a person's face in order to record their attendance in class. It then sends the information to an app, possibly contained on a teacher's laptop or perhaps even on a smartphone.

Looplearn’s introduction in schools is due in part to a federal government grant of almost half a million dollars. The introduction of such a system would no doubt be justified under the pretext of a legal requirement for schools having to record accurate attendance records at regular intervals throughout the school day. Proponents of such a system would claim that it merely automates the process thereby improving attendance recording accuracy and speed for schools by replacing slower existing manual processes.

Despite the company’s assurances that Looplearn is not a surveillance system and that it meets high security standards, there is no information as to what makes it so secure, where (apart from the school) the data is to be stored and who potentially could have access to it.

Should such facial recognition technology become normalized and an accepted part of life at such an early age, then I believe there is cause for concern for the future of society as a whole.

Consider for instance the mass incarceration of one million Muslim Uyghur people in political re-education camps in the far-western Chinese province of Xinjiang. A sinister data collating system called the Integrated Joint Operations Platform has been rolled out locally, making the province one of the most heavily surveilled areas on the planet.

The Chinese Communist Party uses facial recognition technology as part of its surveillance system, such technology having apparently been developed with the able assistance of a number of Australian universities!

The mere fact and manner of how the facial recognition technology is being applied in China should be of grave concern to all citizens of the world. 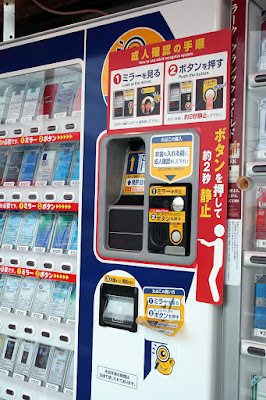 Meanwhile back in freedom-loving democratic Australia, it turns out that the federal government has been entertaining plans to roll out an all-pervasive system possessing the ability to link CCTV cameras nationwide with all citizens’ ID photos.

Specifically, in 2017 it was proposed at a COAG (Council of Australian Governments) meeting to establish the “Capability”: a system that will provide law enforcement and intelligence agencies with the ability to match identification photos with CCTV footage images in real time. Under such a system, all federal and state citizen identification image databases would be linked via a central hub. 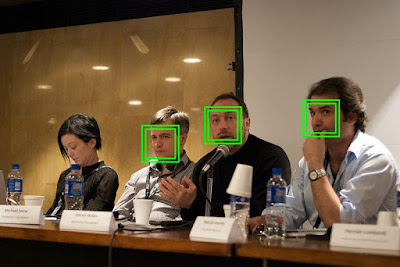 With a continuously activated real time facial recognition surveillance system, anyone who dares to step outside their home will by implication be considered suspect and will have their right to privacy and anonymity removed. But that’s OK, folks! After all, we’d be well and truly used to it since we were kids at school!

We are also supposedly being asked to trust those who are in authority with our personal data and privacy. Now I ask you, have you ever….ever….EVER heard of any occasion in which an agency has transgressed a law involving data retention that was established to safeguard our privacy?? Coincidentally, as I type this, a news report has come on the radio concerning 37 breaches of Australia’s My Health Record system in 2018-19!

Slowly but surely we’re being softened up and manipulated into accepting ever greater degrees of surveillance, without the annoying impediments of public consultation and debate. Take for instance: 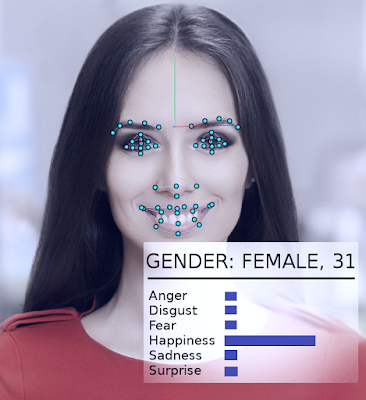 The imperatives of national security and counter-terrorism are employed by governments to justify and increase the scale and scope of the surveillance state with ever increasing powers being handed over to law enforcement and intelligence agencies.

As we have seen in relation to the recent press raids by the Australian Federal Police and and its consequent whistle-blower intimidation, such laws that are supposedly designed to deal with terrorists are in fact being turned upon citizens who are just doing their jobs and upholding our society’s democratic values. If that is so, then who exactly are these people posing a threat to?

The current adoption and use of facial recognition technology with its indiscriminate and large-scale recording, storing and analysing of our images violates our right to privacy and allows the State and private companies to intrude into our affairs in an unprecedented unwarranted way.

We can be sure that the temptation will prove to be too great for the authorities to use blanket surveillance technology to monitor people’s participation in political protests and campaigns for change and could ultimately lead to the infringement of the right to freedom of assembly, association, and expression. 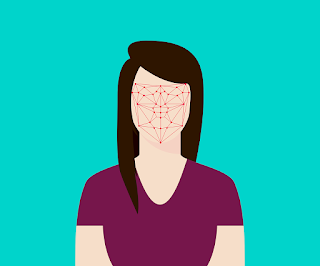 Individuals of colour or from minority ethnic groups should be concerned about the adoption and use of facial recognition technology. Algorithms trained on racially biased data sets could misidentify such people and result in unlawful arrests, detentions and discrimination. A false believe in the infallibility of such systems could determine how state agencies or private corporations treat individuals, leading to bad decisions and outcomes, much of which would be based on a technological form of racial profiling.

With facial recognition technology being increasingly adopted across much of the world by law enforcement agencies, at airports, railway stations and shopping centres, we are becoming far too easily conditioned to accepting automated and indiscriminate live surveillance of ourselves as we go about our daily business while having our every move tracked.

We must ensure that as a minimum we have iron-clad specific legislation that regulates the use of facial recognition technology that restricts the authorities from obtaining our images without our knowledge or consent and using them in ways we would not approve of.

This means that we the people must given the opportunity to consent to the recording, analyzing and storing of our images in databases. At the moment we are being denied detailed and specific information as to how facial recognition is being and will be used. We are at present being denied having the choice and control over the use of our own images.

Science fiction films and stories have often pondered the possibility of our creating a dystopian-style police state in what would have at one time been taken for granted as being a free and democratic society.

Such science fiction visions of the future could very well become a reality if the silent majority (or “quiet Australians”) continue sit back and watch our civil liberties being incrementally and systematically eroded.

We need to take our cue from those around the world who refuse to remain compliant and quiet in the face of the State's abuse of power such as the protesters in Chile, in Hong Kong, in Iraq, in Lebanon and many other places around the world.

Added to the appeals for greater democracy, equality, freedom, the ending of corruption and action on climate change, all of us must also demand that we will not have every aspect of our lives monitored and that our right to privacy and anonymity be guaranteed!!

Posted by Chris Christopoulos at 22:23 No comments:

The Monster of Piedras Blancas (1959) 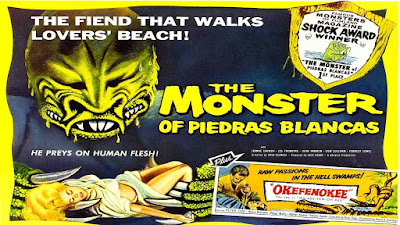 Read more »
Posted by Chris Christopoulos at 22:56 No comments: