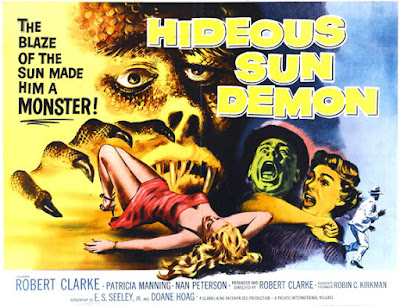 [Outside a large tent, a tempest lashes, whips and whacks at the canvas as if desperately seeking to get at its occupants. Inside the tent a kind of tempest has been stirred up by a traveling preacher, as he manages to get at the occupants by lashing, whipping and whacking at the congregation with the word of the Almighty!]

“….And so, my brothers and sisters, our consideration of the kind of evil and darkness that can lurk deep within the hearts of each and everyone of us makes it necessary for me to relate to you a trans-formative event from one man’s life that occurred ten years ago and which eventually led me on the path to spreading the Lord’s good word.”

[The “reverend” waves a copy of the Holy Bible through the thick sultry, sweaty, stifling air of the big tent’s interior, while the index finger of his other hand describes a wide arch in front of him as if shooting invisible accusatory beams of divine power at the congregation.]

“This anecdote will serve as a kind of metaphor for the sort of battle we all find ourselves engaged in: a battle between good and evil; a battle for our very souls; a battle against Satan himself. But take heart my friends, for ‘the Lord is faithful, and he will strengthen you and protect you from the evil one.’ ”

[The sides of the tent thwip and thwack with increased urgency and ferocity while the hanging lights begin to sway slightly. The reverend's wife, a woman perhaps well into her thirties with dark hair streaked with grey at the front, looks up quickly and shifts nervously in her seat on the stage to the right of and behind her husband.]

Read more »
Posted by Chris Christopoulos at 00:44 No comments: