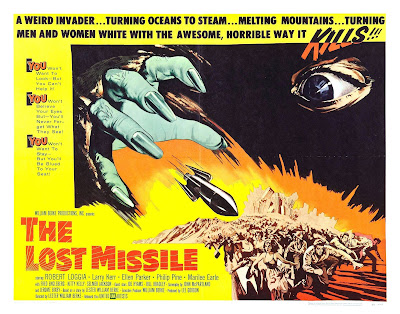 I would recommend that you watch The Lost Missile and follow it up with two classic films with similar themes, Dr. Strangelove [1964] and Fail-Safe [1964]. However, before you begin watching The Lost Missile I would suggest by way of introduction that you check out the following chilling information concerning “Project Pluto.”

Reality Catches Up With Fiction

Project Pluto was a US government program to develop nuclear powered ramjet engines for use in cruise missiles. Two experimental engines were tested at the United States Department of Energy Nevada Test Site in 1961 and 1964. Project Pluto seemed to operate much like "The Lost Missile": a cruise missile (supersonic low altitude missile) that would fly at Mach 3 at 1000 feet, dropping multiple nuclear weapons and destroying everything it passed over by means of a sonic boom and the radiation from its atomic ramjet.