A millionaire by the name of W.H. Donovan crashes his private plane in the desert near the home of Dr. Cory. Dr. Cory is unable to save Donovan's life, but removes his brain in the slim hope that it might survive. He places Donovan’s Brain in an electrically charged, oxygenated saline solution within a glass tank.

The brainwaves suggest that thought and life continue and Cory makes several unsuccessful attempts to communicate with the brain.

Gradually, the malignant intelligence of Donovan takes over Cory's personality and uses Cory to do his bidding such as signing checks in Donovan's name, and continuing the reprehensible millionaire magnate's illicit financial activities.

Cory becomes increasingly mentally and physically like Donovan himself, even down to his limping.

Will Donovan assume complete control over Cory’s mind and body?

Can Cory find a way to resist the brain's power? 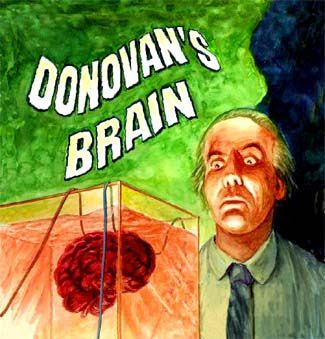 This is the scenario from the classic science fiction / horror film Donovan’s Brain (1953). O.K. We haven’t come anywhere near that sci-fi film’s premise yet, but consider this recent real-life example…...

It has been recently reported from a study in the journal Nature, that US scientists managed to partially revive pig brains four hours after the animals had been slaughtered.

Thirty-two pig brains were collected from an abattoir and four hours later were connected to a system made by the research team at Yale University.

A special liquid was then pumped rhythmically round the brain. The synthetic blood carried oxygen and drugs to slow or reverse the death of brain cells. The pig brains underwent this procedure for six hours. 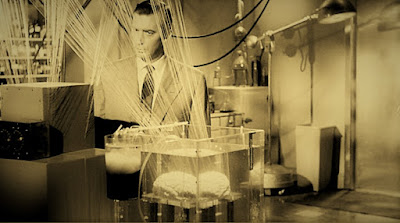 10 hours after the pigs were decapitated;

The study demonstrated that the death of brain cells could be halted and that some connections in the brain (synapses) can be restored.

The findings challenge the long held belief that the brain goes into irreversible decline within minutes of the blood supply being cut off.

An electroencephalogram (EEG brain scan) showed an absence of signals from the brain that would indicate perception, awareness or consciousness.

In summary, according to professor of neuroscience at Yale University, Prof Nenad Sestan, brain cell death occurs across a longer time frame than previously thought and that the process of cell death is a gradual process that could be either postponed, preserved or even reversed.

The findings could raise ethical concerns about what constitutes being actually alive and at what point could an animal or human be considered as being well and truly dead. In the case of animals used in research experiments, could they end up being in a twilight zone of not being exactly alive, but also not completely dead?

We need to begin reconsidering our long-held ideas of when a person can be considered as being dead considering that at present those who are labeled as "brain dead" are a major source of organs for transplant!

If it became possible to restore the function of the brain after death, allowing us to bring back someone's mind and personality, what implications would this have for our definitions of death? Not to mention the religious implications when considering a person’s soul!

The research team used drugs to suppress the pigs’ brain activity. What if they had not done so? Would the brains have been aware? Imagine how cruel this would be.

Of course, such research could provide new insights into treating diseases like Alzheimer's.

Better ways might also be found of protecting the brain after traumas such as a stroke or being starved of oxygen at birth. 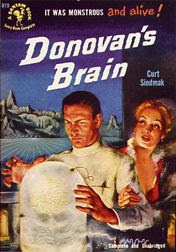 A film like Donovan’s Brain is still relevant today and in the light of recent medical and other kinds of research, it serves to remind us that there is a cost to any aspect of human progress. The question remains; is it a cost we would wish to bear even if we believe that we go into it with our eyes open?


Check out some classic sci-fi films featuring the "Brain" on the Sci-Fi Double Feature Page!

Posted by Chris Christopoulos at 00:18 No comments: 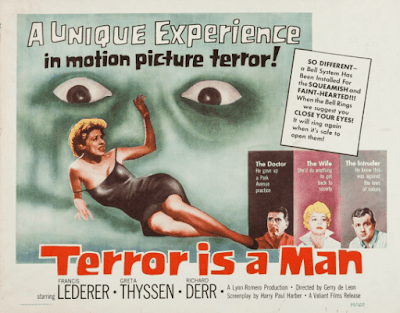 "Terror Is A Man" is a sci-fi film with more superior acting, production values and cinematography than one would expect for a low budget film. The film’s fine camerawork, competent acting, its mournful score, and dialogue help to keep the audience’s interest in what might otherwise be in parts a somewhat dull presentation. 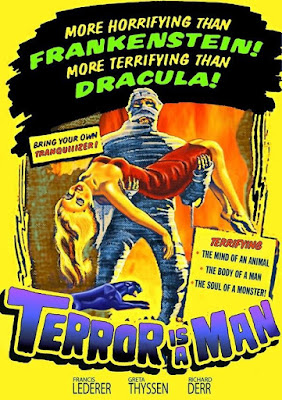 What If?…..the events of the film, Terror Is A Man were contained in the pages of a book written by one of the characters after the events had happened? Let’s see as we read excerpts from…...

The Beast of Blood Island
By
William Fitzgerald

The following account is true and begins with me being a shipwrecked castaway on an island whose native inhabitants had inexplicably fled. It is a story about my secretive host, Dr. Charles Girard and his unholy scientific work. It is a story that also involves Girard’s beautiful wife; his unscrupulous assistant; a female native servant and her young brother.

More chilling and shocking still, it is a story of another mysterious presence on the lonely island in the middle of the ocean – a beastly presence with a bloody murderous intent……….

Read more »
Posted by Chris Christopoulos at 01:33 No comments: