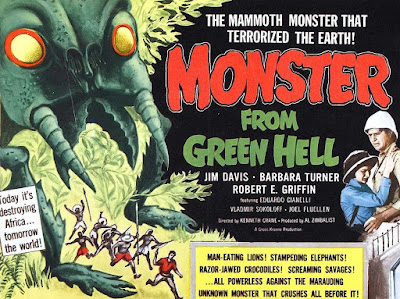 An average 50's giant bug film that peters out at the end.

My colleague, Dan Morgan and I have been put in charge of a U.S. government program that has been designed to send various animals and insects into earth orbit to test the effects of exposure to space radiation.

Why do we do this?

"This is the age of the rocket, the jet, atomic power. When man prepares to reach for the stars. But before he dares to launch himself into space, there is one great question to be answered: What happens to life in the airless void above Earth's atmosphere? Will life remain untouched, unharmed by its flight through space? Or will it change into…what? There was only one way to find out and we were working on it."

And how will we do this?

Thanks to the former Nazi German rocket scientist bastards we spirited out of Germany at the end of the war, we have lots of V2 rockets with which to conduct our tests and prepare human beings for what lies beyond the comforting confines of our planet. It is into one of these rockets that we were able to “load the passengers” and at 10.15 minus 5, 4, 3, 2, 1 we sent them off “into the wide blue yonder!”

After what seemed at first to have been a successful launch, the radar operator informed us that the rocket was “out of normal radar range.”

Read more »
Posted by Chris Christopoulos at 23:55 No comments: