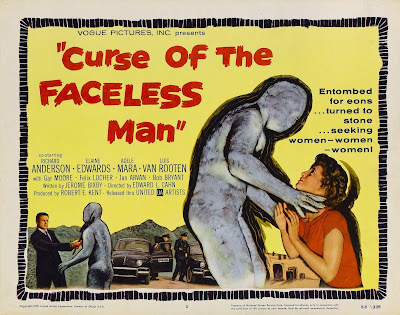 
Richard Anderson as Dr. Paul Mallon: a doctor who specializes in tissue culture.

Elaine Edwards as Tina Enright: Paul’s fiancée, who is a painter and the object of the Faceless Man’s attention.

Luis Van Rooten as Dr. Carlo Fiorillo: works at the Museo di Pompeii and who examines the strange body removed from the ruins of Pompeii.

Adele Mara as Maria Fiorillo: Carlo’s daughter, who once had a relationship with Paul. She has finished her training as a doctor and now works with her father in the museum.

Gar Moore as Dr. Enricco Ricci: a rather undeveloped character who has feelings for Maria but the jealousy angle and resentment of Paul didn’t really feature.

Felix Locher as Dr. Emanual: works at the museum and translates the inscriptions contained on a medallion from a box found with the Faceless Man. He tries to convince the others about the truth of the curses and strange forces surrounding the Etruscans and the Faceless Man from Pompeii.

Jan Arvan as Police Inspector Renaldi: Investigates the first murder but unlike Dr. Emanual, believes that a human killer was responsible.

Bob Bryant as Quintillus Aurelius: a Roman slave/gladiator in love with his master’s daughter. Due to their respective stations in life, Quintillus was denied marriage to this daughter of a senator. After Pompeii’s destruction, he had been preserved in a state that was not quite life, nor was it death. He has now risen from the ruins of the past to be reunited with his lost love who he believes is his beloved Tina. 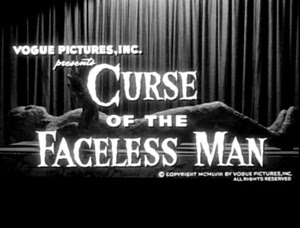 What if you lived in a “future time” where our current notions of time as being a linear progression starting from the past, moving to the present and then proceeding on into the future were replaced by something different?

What if you saw time as being flexible in which the past, present and future all exist simultaneously in an infinite series of combinations and possibilities? If you couldn’t prove this by physically moving to some era in the “past” or by flinging yourself forward into the distant “future,” perhaps a way will eventually be found in which you could peer across into, for instance, a period in the “past.”

Time itself might be seen as being like a giant circular vinyl LP record (for those who can remember!) consisting of grooves grouped into tracks representing different time-periods. The album might be infinite in size and there may even be an infinite number of such albums. The question is; how might one move out of a particular groove, escape from the track it is a part of and cross over into another track?

What if we all had a latent or dormant ability to witness events occurring in the past and that such an ability could be stimulated by micro or Nano bio-technical enhancements, chemical stimulation and intense meditation practices?

What if such procedures could enable you to produce behind your closed eye-lids a kind of small time-lens or bubble through which you could see events in the past unfold before you like in a movie?

Of course, what would unfold before you would be from a random era and would consist only of visual images devoid of the auditory and olfactory elements of life in a given time period and location. Ah, but the colours! Who would’ve thought such colours would’ve been possible at that period of time?

One such time mind-traveller might be witnessing a street scene in which some young men sporting straw boater hats with coloured ribbons around the crown boisterously striding past a couple of young ladies attired in long pastel coloured afternoon dresses. Suddenly, on a rather uneven and rutted road, a metallic mechanical monstrosity shakes and vibrates into view. The cacophonous sounds it makes and the stench that emanates from its exhaust can only be guessed at from the terror-stricken reaction from a nearby horse pulling its load of produce, as well as from the fumes that seem to lash out in all directions from the metal monster’s posterior. 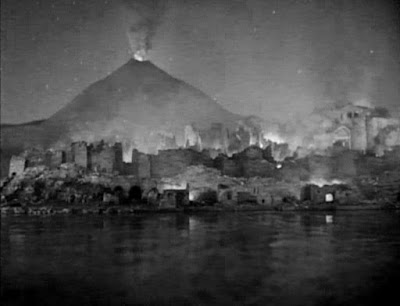 Another time mind-traveller, however, might be witnessing the destruction of the city of Pompeii in 79 A.D. with the eruption of Vesuvius. Just imagine what events our mind-traveller would be witnessing only "79 years after the birth of Christ, (when) the city of Pompeii ceased to exist! Destroyed by a mountain of seething hell known as Vesuvius. (Imagine!) On a quiet August afternoon, almost 2000 years ago, the volcano erupted, the Earth shook, day became night, birds fell dead from the sky, fish died as the oceans boiled, and the people of Pompeii perished under an avalanche of volcanic ash and stone, burned, suffocated, crushed……"

From the above temporal flight of fancy, it is this view of a slice of the past that leads us to the first of the films from the year 1958 that is offered up for your enjoyment and consideration: Curse of the Faceless Man. It is a tale in which past and present seem to merge in a most terrifying way….

Read more »
Posted by Chris Christopoulos at 23:33 No comments: