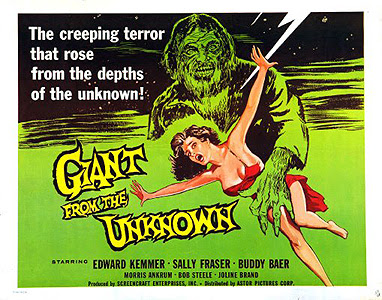 A rather cheap and pedestrian sci fi film with an absurd premise, lots of “stuff” happening, rather unconvincing acting, somewhat dull dialogue and a largely unimpressive “monster’ character. Perfect viewing fare for a rainy afternoon!

In your endless wanderings throughout the 1950s classic sci-fi universe, you manage to trudge into yet another film world, this time with your coat collar turned up high around your neck and your coat buttoned up tightly against the onslaught of wind and rain from a thunderstorm. As you make your way through a mountain forest, you fail to notice a warning sign in the form of a 16th century axe embedded in a log of wood.

Read more »
Posted by Chris Christopoulos at 00:31 No comments: