Amazing medical advancements have often featured in science fiction stories in which devices are employed to help the blind to see or the physically impaired to regain their mobility and independence.

The concept of trans-humanism is often explored in sci-fi highlighting the more sinister applications of using devices such exoskeletons to enhance human abilities, especially in relation to military applications.

Just recently, we have learned that a man has been able to move all four of his paralyzed limbs with a mind-controlled exoskeleton suit.

The patient had suffered an injury to his spinal cord that left him paralyzed and he spent the next two years in hospital.

Then in 2017, he took part in the exoskeleton trial with Clinatec and the University of Grenoble, France.

He began by practicing using the brain implants to control a virtual character, or avatar, in a computer game before moving on to walking in the suit.

By “walking” we are not referring to autonomous walking as the patient needs to be attached to an overhead harness in order to reduce the risk of him falling over.

Although the man’s movements are at the moment far from perfect and the exoskeleton suit is being used only in the lab, this development could in the future lead to the improvement of patients' quality of life.

The patient in question had surgery to place two implants on the surface of his brain (to avoid possible infection), covering the parts of the brain that control movement.

Sixty-four electrodes on each implant read the brain activity and beamed the instructions to a nearby computer.

The computer software then read the brainwaves and turned them into instructions for controlling the exoskeleton into which the patient had been strapped.

When the patient thinks "walk," a chain of movements in the robotic suit are set in motion that in turn move his legs forward. He can also control each of the arms, maneuvering them in three-dimensional space.

At the moment there are limits imposed by the amount of data that can be read from the brain, sent to a computer, interpreted and then sent to the exoskeleton in real-time. Only 32 out of the 64 electrodes on each implant are being used. There is, therefore potential to read the brain in more detail by using more powerful computers and artificial intelligence to interpret the information from the brain.

The implants have been successfully used by the patient to control a wheelchair and there are plans to develop finger control to allow him to pick up and move objects.

The future holds out wonderful possibilities with such medical advancements especially when combined with progress in the areas of spinal cord and nerve regeneration.

On the face of it, no-one can argue with the development and application of such amazing technology that is aimed at the repairing of injured patients who have lost function. Will it, however be made available to everyone with spinal cord injury, or will the cost of it place it out of reach of most who would need it?

One can easily imagine a future in which human beings will be routinely implanted with microchips and electrodes allowing them to control with their minds and the power of thought not just medically assistive devices, but everyday devices such as houselights and appliances.

Technology that we now carry around with us will be incorporated into our attire and accessories and then into our very bodies. Some day, all the functions we can now perform with our smart phones including communication will be able to be performed via mind-control.

The question remains: who or what will be doing the controlling?
Posted by Chris Christopoulos at 16:08 No comments:


The often-used phrase “going forward” tends to be employed by politicians and those in authority to deflect attention away from whatever mess is currently taking place and which they have been responsible for having created in the first place.

Science fiction writers and sci-fi films also deal with matters of “going forward” with a view of allowing us to actually look forward into the future and contemplate what may be in store for us. By doing so, they also enables us to reflect on our present condition.

My poem below attempts to make use of the now hackneyed phrase, “going forward” to highlight some developments we see in society today and consider their possible implications in the future…...a future which is in our hands to do something about right NOW!

Off we go on linear leaps
Forward toward a fantastic future,
Where all will be well and so shiny
In a social media virtual stupor.

Or so we convince ourselves
As we wade through the mess we made,
And hope that no-one will notice
The price for our folly to be paid.

To a time where the blind can see,
All but what is in front of their eyes
And where many will live forever,
To endure an eternity of lies.

We launch into a race into space,
But with whom, why and where?
For national pride and to win!
Lebensraum! We don’t care!

We all get carried along apace,
And the silent majority fall in line;
Our progress checked and monitored
Hup, two, three, four, we march in time.

An empire fades and another rises,
While fools play pretend presidents,
And tweet out their egos and paranoia
Like petulant infantile malcontents.

Ensnared in a net and a web
All together, all of us connected,
Hauled along by codes and algorithms
To whose cruel rule we are subjected.

We stride on followed, friended and liked,
Arm in arm with like-minded tribes,
Clutching cherry-picked facts to our breasts,
With which to beat others with insults and gibes.

We reel from Earth’s blast furnace breath,
And stagger back into stinking waters
Lapping and rising about our feet,
While millions are forced to float over boarders.

We swap good sense with A.I. nonsense
And live in smart cities and smart homes,
Knowing less about more while feeling alone,
Dependent on Alexas and smart phones.

To a place where all is commodified,
To a time where “freedom” is just a word,
To a life lived and liked as a valued consumer,
And where “privacy” is a notion just too absurd.

Our evolution is taken in hand,
Man and machine merge into one,
While genes are shuffled and sorted
And all the old certainties are undone.

Like Luddite apes with minds held fast
By rusted chains anchoring us to our past
Can we be sure we wont trip over in haste?
“Wisely and slow. They stumble that run fast.” 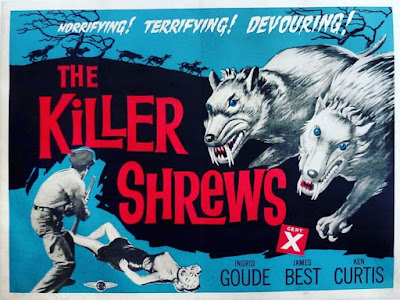 A mediocre film with laughable creatures, minimal tension and underdeveloped characters but with numerous martinis and a well stocked bar being the only redeeming feature! A film best enjoyed after several martinis.

A remote and isolated island,


Infested with flesh-eating monstrous giant shrews!
Populated by a small band of humans,
Cut off and stranded by a hurricane!

How did the vicious shrews come to be there?
What will become of the trapped humans?

Read more »
Posted by Chris Christopoulos at 01:39 No comments: