Woke up this morning and stumbled into a dream,
As my eyeballs fell from my head and onto a screen
That told me all I had to know for the whole day:
What to think, where to go and what to say.

In the bathroom the lights switched on as if by magic,
Forcing me to face a face hiding something tragic,
Until the shower shot forth and misted the mirror,
And then the water turned cold, making me shiver.

In the kitchen the toaster offered me burnt toast;
DAB News served up a new POTUS tweeted boast;
Wall-screen showed autocrats of a feather flocking together,
And my phone filled me in all about the day’s weather.

After dodging screen zombies devoid of a brain,
I commuted to work on a morning maglev train.
All heads bowed in techno-prayer morning devotion,
Till the train revealed unto each his or her own station.

Looked out the window through liquid scars made by rain,
And glimpsed a giant octopus wrapped around the train,
Tentacles probe for weaknesses through which to navigate
But then no-one would notice until it was too late.

My mind tried to hide me in ruins of a post-war world,
A lonely nether-world in solitude safely curled.
Give me just four others to start over once more!
- And see how fast we five embark on the path to war.

I escape to my specs with heads-up views
Of favoured feeds of views in news I choose.
Where I also find I’m liked, followed and friended
Which is good news as I’m so easily offended!

My gadgets know me all too well,
Why here’s a business wishing to sell
Luna holidays by Musk Moon Destinations
Who even offer earth-orbit vacations!

When the train pulls into my station,
I then waft to work by auto-perambulation
All the while being filmed, found and filed
ReKognized, tracked and even profiled.

My work is a slice of hot-desking heaven
In an open-plan glass and chrome cavern,
Where nothing and no place can be called your own,
And where no-one is ever allowed to be alone.

At work we work as part of a team,
Where some are heard, and all are seen
Nodding with a false sense of consensus,
Avoiding being labelled as dissentious.

We perform our tasks standing like stupid storks,
Proudly counting our steps, we of the Fitbit dorks.
Now and again we twitter, chitter and chatter away
With plenty to prattle about, but with little to say.

I produce nothing and contribute even less,
Data collected and organised to cause others stress.
I then clickity-clack, thumb print and eye-scan away
And update my status for the rest of the day.

Eyes from on high follow me all the way home,
Assessing my mood whenever I sneer or groan.
Word will reach my mini personal assistant,
Who’ll gush with remarks both banal and buoyant.

“Welcome home Winston, sit down and relax,
The auto chef has even made you some snacks.”
I submit and sit in my form-moulding chair,
While the wall-screen flits on my favourite fare.

“It is confirmed that a flying saucer landed this morning,
Near the White House and issued us all with a warning
That we should change our ways or suffer destruction,
While POTUS merely replied with a “Fake News!” deduction!”

“Meanwhile two Kaiju cases have occurred overseas:
One that felled and flattened Tokyo with ease,
The other that rendered and ruined San Francisco,
Both beasts have since returned to the depths below.”

"Many were surprised to learn that Gotham City’s Batman
Had declared that he is indeed an openly gay woman,
While The Doctor had somehow managed to lose his dick
As he fled from an emotionally deranged Dalek!"

“Finally, the Earth and Mars are now in a state of war,
The cause of which no-one is really sure.
Suffice to say that Musk Martian Destinations
Have suffered severe stock market reductions.”

I try at night to sleep and wake up from my dream.
I long for time travel to flee from where I’ve been,
Back to a time where all this had been foreseen,
And which would not for so long have lain unseen. 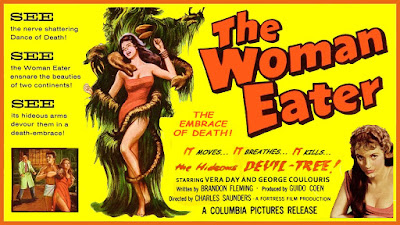 An entertaining film containing quite a good yarn sandwiched between a silly beginning and an awful ending.


A crazed scientist feeding women to a flesh-eating tree!
A serum that can bring the dead back to life!

REIGN OF TERROR FROM EARTH!

In my previous post on the film, The Trollenberg Terror (1958), I concluded with a brief observation about the role of women in both vintage and modern era sci-fi and other genre films.

The Woman Eater presents us with an interesting insight into the exploitative nature of many films at the time in relation to the portrayal of female characters. It does this in an odd way by seeming to make use of and be almost enumerating every exploitative technique under the sun in its depiction of the female gender. Whether intentionally or unintentionally, The Woman Eater highlights the various ways in which a male-dominated society sets about using and as the title suggests, consuming women for its own benefit.

Such a situation in both the entertainment media of film and TV and in the wider society it reflects would inevitably produce a reaction that would take decades in the making. Consequently, we now have in film and in areas such as politics and the corporate world, more women being represented and brought to the fore either through personal merit, quota systems or positive discrimination.

Unfortunately, in many instances the reaction produced has turned out to be just as problematic as the original set of social circumstances that led to it. As women fill more prominent roles in film and the real world, they are often simply being asked to speak and behave in ways that are sadly indistinguishable from their male counterparts. Little that is unique or distinctive about women is allowed to be explored within an already established system whether it be the depiction of female roles in sci-fi and other films or female conduct in the world of politics and the opportunistic and self-serving corporate sphere.

Could an unintended consequence be the eventual creation of an expanded power elite consisting of an equal proportion of male and female members leaving the rest outside (as Orwell might have put it) looking from woman to man, and from man to woman, and from woman to man again; and being impossible to say which was which……

We seem to have moved away from a world that normalized the idiotic notion of females being seen as fragile and subservient beings in constant need of rescuing and have instead slipped down a rabbit hole into a bizarre world of elitist jack-booted feminism populated by angry and intense females with men being allocated the roles of irrelevant limp under-performing appendages! Such warped notions and outcomes surrounding gender roles and equality are being frequently depicted in modern films, particularly in sci-fi and action-type films.

So, what about this 60-year-old film, The Woman Eater? What makes it stand out from other similar films of its era?

Read more »
Posted by Chris Christopoulos at 01:41 No comments: