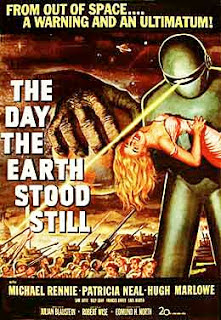 An intelligent and thoughtful Film


Essentially, The Day The Earth Stood Still is about a man from space who comes to Earth to warn its inhabitants about the consequences that will befall them should they threaten peace in the universe by extending their nuclear arms technology beyond the confines of planet earth. After spending time with humans, it becomes apparent to him that drastic action must be taken to get humanity to pay attention to his message. He decides, therefore, to stop all machinery on Earth for half an hour as a demonstration of his power.

Will this demonstration succeed in bringing humanity to its senses? Will the earth need to be destroyed to ensure the peace and well-being of the rest of the universe?

Go to the full Lux Theatre  old time radio presentation featuring Michael Rennie to experience what it was like on.....

The kind of distrust, fear and hostility that was portrayed in the film is better understood when seen in the context of the times; 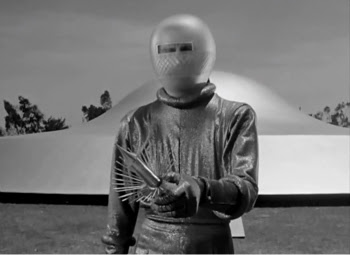 As was pointed out above, the 1950s were a time of fear, suspicion and distrust and the film clearly reflects this. In the film, The Day The earth Stood Still, it is suggested by one character that the saucer is really from (where else?) Russia. The TV / radio presenter further expresses this atmosphere of fear through his assurance that “…so far that there is no reasonable cause for alarm. Rumours of invading armies and mass destruction are based on hysteria and are absolutely false. I repeat, they are absolutely false.” And what happens soon after the saucer lands? It is surrounded by heavily armed soldiers and the spaceman is then shot by one of them soon after he emerges from the ship, despite declaring, “We have come to visit you in peace and good will.” What kind of world has greeted the visitor!? The kind of world that would destroy “… a gift (that we could have used to study) life on other planets.” 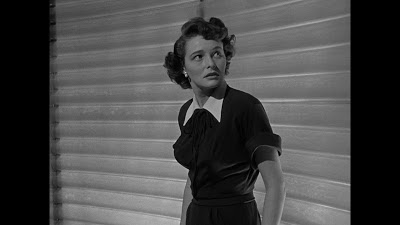 Patricia Neal’s single mother character is probably representative of many war widows of the time who were face with very difficult choices and very few options. She is faced with living at a boarding house and supporting herself and her son on her own. She works as a secretary in an office in an era when women were expected give up their war time jobs to returning servicemen, get married and become stay-at-home mothers. To make matters worse, she could have wound up with a selfish, opportunistic and weak fiance (Tom Stevens) who wants to get married quickly as a career advancing selling point and who doesn't "care about the rest of the world." 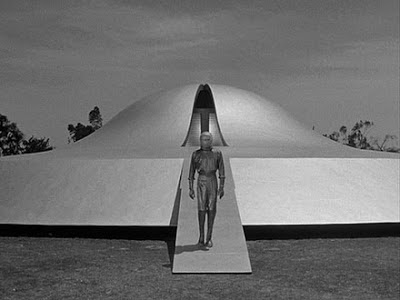 Whether intended or not, one can’t help but see Klaatu as a kind of Christ-like savior figure who holds out to us the promise of our own salvation. He has come here (from up above!) -“I traveled 250 million miles”- to deliver a message of peace. His attempts are rejected by the world’s leaders who are too caught up with their own petty political squabbles (“Our world at the moment is full of tensions and suspicions.”) Klaatu then determines to understand humanity by living among people and adopting the name “Carpenter.” That he is a gifted stranger with acute powers of observation and insight there can be no doubt. Klaatu even has what seems to us advanced healing powers as reported by one physician who stated that Klaatu had cured his bullet wound with a salve he’d brought with him. Klaatu is eventually betrayed by a Judas-like informer (Stevens) who is intent on being “the biggest man in the country” and is killed by the military, only to be resurrected for a time. Sounds roughly familiar? 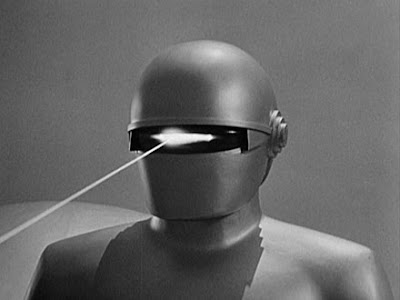 There appears to be a rather “old testament” dark and vengeful side to the character Klaatu and what he represents. We have a sense of a “salvation OR ELSE!” message being given if humanity doesn't come to its senses. The kind of power we are dealing with here is evident as Klaatu and Helen are being hemmed in by the military and he states, “I’m afraid of what he (Gort) would do if anything should happen to me. There’s no limit to what he could do. He could destroy the Earth.” The sense of menace to our very survival is so strong that, not only Helen, but we, the audience would “remember those words,” “Klaatu Barada Nikto,” and we wouldn't hesitate to repeat them back to Gort if anything were to happen to Klaatu! The message is quite clear: We act foolishly at our own peril and we if we choose to ignore the message of peace, we will fall to an unimaginable and implacable force that will show us no mercy. This force is revealed to the audience in the form of a large indestructible robot equipped with a powerful laser-like beam able to dissolve tanks, cannons or the entire earth. We will be rewarded if we do good and punished if we do wrong. In short, “your choice is simple: Join us and live in peace or pursue your present course and face obliteration.” 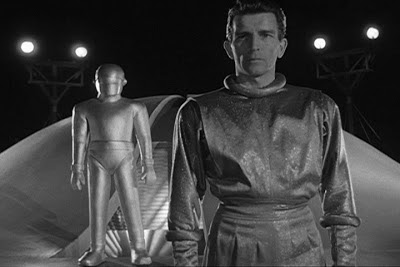 The best way to appreciate the 1951 version of The Day The earth Stood Still, is to watch the 2008 remake starring Keanu Reeves. After enduring this version featuring Keanu Reeves’ wooden performance punctuated by some fairly impressive special effects, you’ll soon see why the original version stands head and shoulders above that effort. The 1951 film holds up very well even in the 21st. Century. It shows that sometimes you can do more with less…