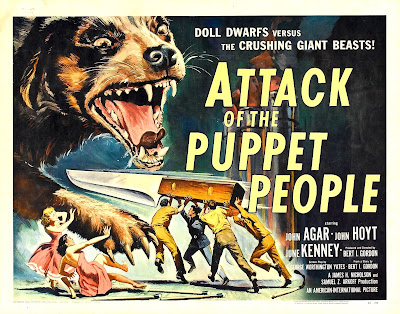 Although not on a par with "The Incredible Shrinking Man," the effects are OK considering the low budget, the acting performances are competent and the film’s pace never allows boredom to set in.


A deranged doll-maker afraid of being alone!


A machine that can shrink humans down to only a few inches tall!


A collection of miniature prisoners forced to perform and serve as living dolls!
What can the pint-sized plaything puppets do to save themselves?


Read more »
Posted by Chris Christopoulos at 23:58 No comments: 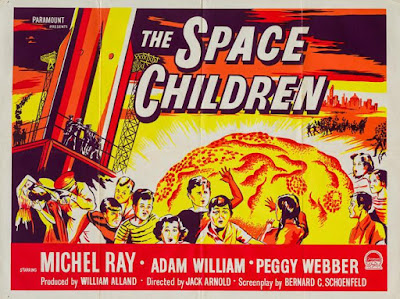 A father takes up new job at a top-secret Air Force base in California.
A family apprehensive about this sudden upheaval in their lives.
What’s this - a strange light in the sky aimed at the beach?
Strange powerful telepathic communications from an unknown source!
An alien presence in the form of a growing brain within the cave near the beach!
A missile project, designed to place a hydrogen bomb in orbit, capable of being used on any target in the event the United States is threatened!
Children being used to persuade parents of the danger posed by the project!

Will the parents be prepared to listen?
What will the alien brain do if the children’s appeals are ignored?

Read more »
Posted by Chris Christopoulos at 23:30 No comments: