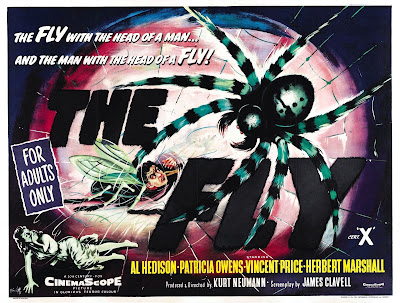 The film treads a fine line between comedy and seriousness. It benefits from a good script, production values and capable performances but wastes many opportunities to become something greater than it is.

“It does indeed contain, briefly, two of the most sickening sights one casual swatter-wielder ever beheld on the screen.”
"The most ludicrous, and certainly one of the most revolting science-horror films ever perpetrated!"
“One of the better, more restrained entries of the "shock" school.”
“A quiet, uncluttered and even unpretentious picture, building up almost unbearable tension by simple suggestion.”
“It holds an interesting philosophy about man's tampering with the unknown."
“Stands in many ways above the level of B-movie science fiction common in the 1950s."

Scientist Andre Delambre is crushed to death in a mechanical press.


WHO OR WHAT WAS RESPONSIBLE?

It has fallen to his wife Hélène to recount the events that led up to her husband’s death to both Andre’s brother, Francois Delambre and police Inspector Charas.

Read on to find out……
Read more »
Posted by Chris Christopoulos at 00:07 No comments: