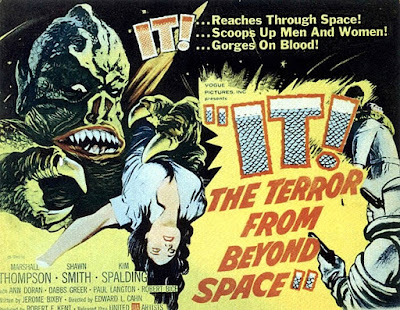 In a “future” 1973, the first manned expedition to Mars has been attacked and destroyed by an unknown life form which somehow later manages to stow away on the rescue ship. There is only one survivor from the initial ill-fated expedition: the leader, Col. Edward Carruthers. He is being brought back to earth under suspicion of having murdered his fellow astronauts! Will he have to face a firing squad for the crime of murder, or can he prove his claim that a Martian monster is to blame for the deaths of his crewmates?

Col. Ed Carruthers: (played by Marshall Thompson) Captain of the first expedition to Mars. All his crewmates were killed by the creature, but he is the one blamed for it.

Col. Van Heusen: (played by Kim Spaldin) Captain of the rescue ship that is sent to rescue Ed Carruthers and his crew. Initially he is hostile towards Carruthers and manages to become infected by the alien stowaway. 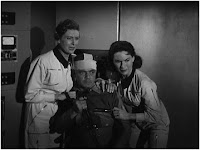 Major John Purdue: (played by Robert Bice) He gets injured and spends most of the movie with a bandage on his head. 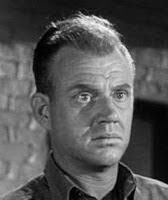 Lt. James Calder: (played by Paul Langton) Suffering a broken ankle and armed with only a blow torch, he becomes trapped between a couple of induction pumps by the monster.

It!: (played by Ray Corrigan) A Martian life-form that stows away on the rescue ship and sets about picking off the crew one-by-one so that it can drain them of all their bodily fluids. The creature appears to be impervious to bullets, fire and radiation.

Read more »
Posted by Chris Christopoulos at 01:00 No comments: 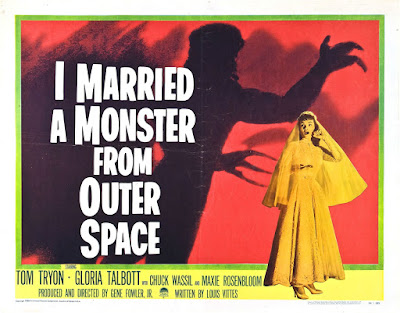 A commendable sci-fi film with impressive camerawork, mature dialogue, effective special effects, and good acting - but one that deserves a much better title!


I Married a Monster from Outer Space is set in the fictional town of Norrisville, California where Bill Farrell is having his bachelor party on the eve of his marriage to Marge Bradley. After leaving the bachelor party, he is abducted by an alien that takes on his form. The alien “Bill” marries Marge the next day. It doesn’t take long, however, for Marge to feel that there is something different about Bill. After a year of marriage, Marge realises that Bill has become a completely different man!

How does Marge deal with this revelation?


What else is discovered about this impostor?


Who else has been affected?
What is the purpose of this strange alien invasion?

What It Means To Be A Man

Despite the corny-sounding title, I Married a Monster from Outer Space, the film has a lot more depth to it than its title might suggest. For one thing, it speaks volumes on what it means to be a “MAN” in the modern world.

At the time the film was made, there was a lot more certainty surrounding gender roles and expectations. It would have been expected that males would wind up being the bread-winner and head of the family while women would be expected to be largely subservient home-makers and mothers.

As far as conventional male and female relationships is concerned, I Married a Monster from Outer Space calls into question the then contemporary concept of maleness. It even continues to do so sixty years later when right now in the early 21st Century many males often find themselves grappling with trying to figure out what their role in society is supposed to be. This can be quite a daunting task particularly at a time of re-evaluation of gender roles; the push toward gender equality; the increasing feminisation of society and perceived social & political correctness in matters concerning expressions and manifestations of maleness.

Read more »
Posted by Chris Christopoulos at 01:09 No comments:

Also, keep an eye out for the next classic Sci-Fi film for 1958 which will be posted soon. It will be "I Married A Monster From Outer Space." But don't let the title fool you! You'll see what I mean......

Posted by Chris Christopoulos at 01:25 No comments: