We ended our Sci-Fi film journey through 1955 with an alien threat to Earth in the blockbuster, This Island Earth. We also saw our planet being threatened by alien menaces in The Beast with a Million Eyes and The Quatermass Xperiment.

As we saw, such fears did not stop us from venturing out into space and facing the perils of the final frontier in the ground-breaking film, Conquest of Space.

Threats to our survival came not only from outer space but also from that other little known frontier, the seas and oceans of the world in such films as, It Came from Beneath the Sea and Revenge of the Creature.

Of course, there were also threats to our survival that were largely of our own making such as in Creature with the Atom Brain, Day the World Ended and Tarantula. 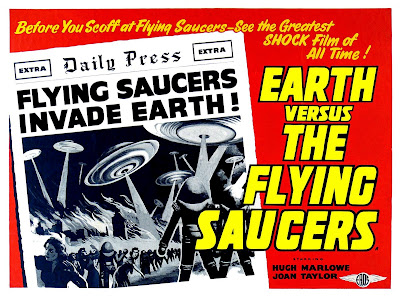 We’ll be beginning our journey through Sci-Fi on film for the year 1956 in much the same way as we ended our look at the previous year. We’ll start off with an alien threat to Earth in the classic, Earth vs The Flying Saucers. Other films from 1956 that will be featured include; 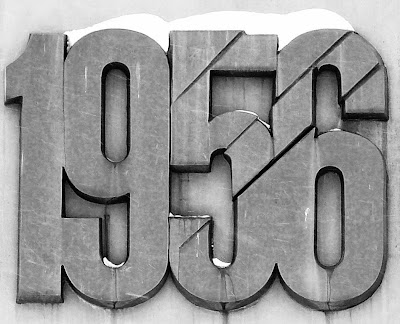 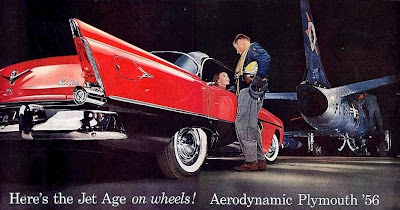 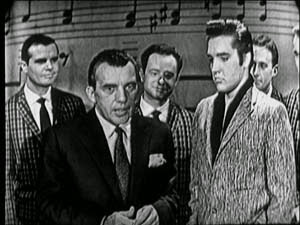 Along with an increase in living standards there was an increase in college education with 1 in 3 high school graduates going to college. On TV you’d probably be watching "As The World Turns" and "The Price is Right" along with the Ed Sullivan show which even featured a certain Elvis Presley who entered the music charts for the first time with his hit, "Heartbreak Hotel." By his third and final appearance on the Sullivan show, Elvis was filmed from only the waist-up. due to complaints about his suggestive hip-swivelling gyrations! Oh, and Hallelujah for disposable diapers and tefal non-stick frying pans!


Events, conflicts, advancements in science and technology and the way we live today have their genesis in the time period which is the focus of this blog.

Then as now, countries try to extend their power and influence by means of direct interference in the affairs of other nations, leaving future generations with a mighty mess to clean up.

Since the fifties the conflicts in the Middle East have proven to be intractable. Tensions between the Muslim world and the Western world have been strained.

Palestinians are still trying to obtain their own state and reclaim basic dignity and human rights by breaking out of the apartheid-like system they have been forced to endure.

Racial conflict and inequality is still being grappled with in the US and elsewhere with incidents involving the death of unarmed black civilians at the hands of law enforcement officers providing the trigger for the release of pent up feelings of injustice and discrimination.

Oh, by the way, at the time of writing, the failed 55 year old US policy of embargo on Cuba appears to be on the verge of being revoked.

And did I mention that we still have the capacity to destroy the world several times over with the nuclear weapons we have at our disposal?

Distrust of government and authorities? Surely not! In 1956 the CIA engaged in a secret program called MK-ULTRA that included dosing hundreds of unsuspecting subjects (people) with LSD and other hallucinogens! We can trust ‘em now, right? right?

Let’s see what was happening back in 1956 and the kind of legacy that was left to future generations……. 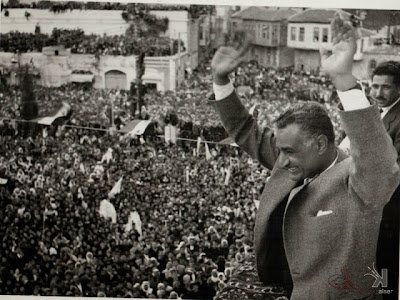 Nasser nationalized the Suez Canal to provide revenue for the construction of the high Aswan dam. His speech in Alexandria, which included the code word “De Lesseps,” triggered the army to start the seizure of the canal. Egypt seized the Suez Canal and then Britain and France responded with force.

Britain and France had announced economic pressure on Egypt to accept international control over the Suez Canal. This was followed by British, French, US agreement to establish an association to operate the Suez. Nasser viewed this as an attempt to provoke war.

An Israeli delegation presented France with a fabricated reason for war in Egypt. Israel proposed to invade Egypt and then let France and Britain come in as peacekeepers and occupy the Suez Canal. 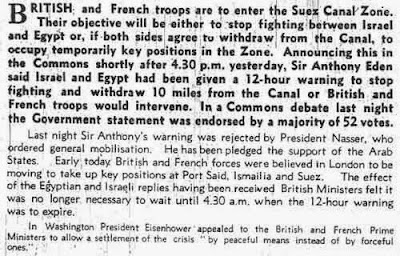 British Prime Minister Anthony Eden had agreed with the French that once fighting began, they would send in paratroopers under the pretext of separating the fighting factions, but would actually support Israel, seize the canal and undermine Nasser. 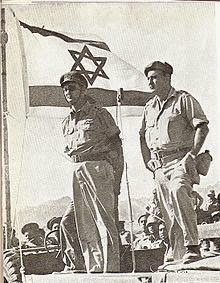 Gaza was occupied by the Israeli army and evacuated in March 1957. 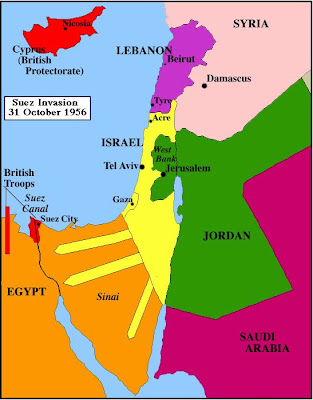 Britain and France land troops in Egypt during fighting between Egyptian and Israeli forces around the Suez Canal. A cease-fire was declared two days later.

The UN created an emergency force (UNEF) to supervise a cease fire. 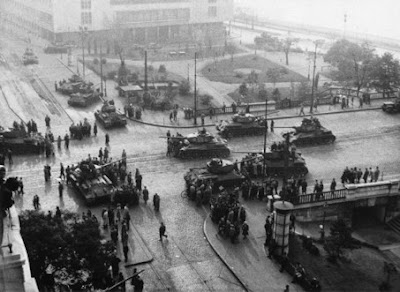 Fidel Castro begins a revolution in Cuba. He and 81 rebel exiles departed Mexico to liberate Cuba from the corrupt dictatorship of Fulgencio Batista. Khrushchev announced that the USSR would produce an H-bomb guided missile. He also told Western diplomats "We will bury you." (Also translated as “be present at the funeral” of the West.)

The Sino-Soviet ideological rift developed. (These days we tend to snuggle up to China due to its influence and economic clout despite it being a one party dictatorship with questionable conduct toward those who display dissent or seek independence. We jumped into bed with Russia for a while but they’re once again the bad boy on the block. It would be interesting if Russia and China suddenly discovered a new found love for each other! And so it goes on and on….)

The future dictator of Iraq, Saddam Hussein joined the Arab Baath Socialist Party. (We know where his career path led….)

After the French withdrew from Vietnam, the US installed and financially supported the political puppet regime of South Viet Nam. South Vietnam was essentially a creation of the US. Later on there were US advisers and support staff and then full-scale involvement. (Sound a bit familiar?) 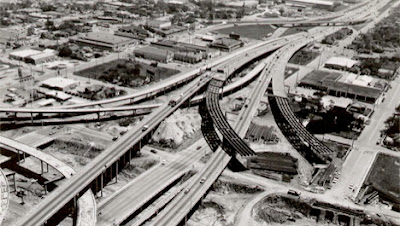 US Congress approves the Highway Act, which allows for construction of the U.S. interstate highway system. (Ah, nothing like dependence on oil and the motor car. Love the smell of petrol fumes first thing in the morning!)

The US Federal Hourly Minimum Wage was set at $1.00 an hour

The first known airborne US hydrogen bomb was tested over Bikini Atoll in the Pacific. 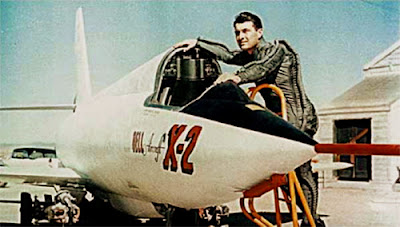 IBM’s Model 305 computer was capable of storing 20 megabytes of data.

IBM lab leader Reynold B. Johnson developed a way to store computer data on a metal disk instead of on tape or drum. 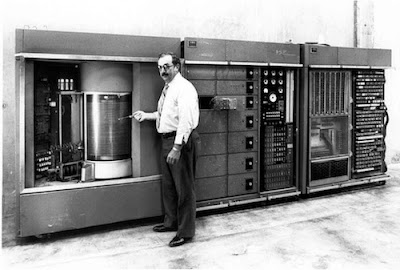 The first commercial disk drive, called RAMAC (random access method of accounting and control) used 50 disk platters, each 2-feet in diameter and held (a whopping!) 5 megabytes of data! It was the start of the disk drive industry and many thanks to them. (I have a compact 1 terabyte storage device next to me that would've made the developers curl up in a foetal position!)

The first all-colour TV station was NBC-TV in Chicago.

The neutrino, an atomic particle with no charge, was produced at the Los Alamos laboratory in the US.

The cosmic-ray neutron intensity monitor collected the first evidence indicating the existence of the heliosphere, the region of space dominated by the Sun. The edge of the heliosphere is a magnetic bubble-like medium and is located far beyond the orbit of recently demoted Pluto. The region is influenced by the sun’s magnetic field.

The computer mouse was invented. The point-and-click graphical interface was introduced by an MIT group working on the Whirlwind computer. The mouse was originally referred to as an "X-Y Position Indicator for a Display System." (Not a very furry or friendly term!)

It was first proposed that “free radicals” caused aging, indicating that antioxidants may slow the process. (And now we have a whole industry based around it!)

MD Ross and ML Lewis reached 22.8 km in a balloon while Dr Edward Purdy Ney and colleague, John Winckler, built a pyramid-shaped balloon that set a world altitude record of 27 miles. It carried instrumentation for meteorological and cosmic-ray research. 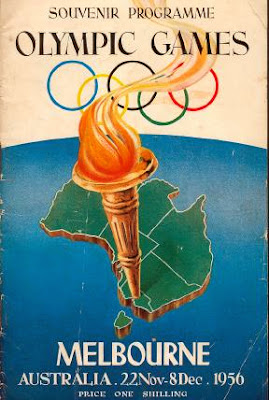 The Olympic Games are held in Melbourne, Australia. The Netherlands and Spain refused to compete in support of Hungary following Russia’s invasion. 45 athletes from Hungary defected during the games. Egypt, Lebanon and Iraq boycotted the games as a protest over British and French involvement in the Suez Canal crisis. China also boycotted the Games in protest at the inclusion of athletes from Taiwan.

Australian swimmer, Murray Rose became an Olympic champion winning the first of his three gold medals at the Melbourne Games in the 4 x 200m freestyle relay.

Light heavyweight boxer Rocky Marciano announced his retirement with a record of 43 knockouts and having won every fight in his professional career.

At age 21, Floyd Patterson became the youngest boxer to win the heavyweight crown when he knocked out Archie Moore.


Movies included The Ten Commandments, Around the World in 80 Days, The Man with the Golden Arm and The Seventh Seal

Songs included Don’t Be Cruel, Blue Suede Shoes, Hound Dog and I Could Have Danced All Night. Rock and roll becomes a national phenomenon, in large part due to the popularity of Elvis Presley.

The Man In Black, Johnny Cash recorded "Folsom Prison Blues" and "I Walk the Line."

John Lennon formed a British band called the Quarrymen. (We all know what that band morphed into!)

The first edition of "Howl" by Allen Ginsberg is published.

C. Wright Mills’ "The Power Elite," was published in which it was asserted that a small group of powerful decision makers drove national events. (Whoda thunked it?Required reading back in my college days in the 1970s!) Autherine Lucy arrived at the Tuscaloosa branch of the University of Alabama and became the first black person to enrol there. She had been accepted in 1952 and then was denied because of her race.

The U.S. Supreme Court affirmed the ban on segregation in public schools in Brown vs. Board of Education and also ended race segregation on buses.

In South Africa the government ordered over 100,000 non-whites to leave their homes in Johannesburg within a year, in order to make room for whites.

Nelson Mandela and 156 others were arrested for political activities in South Africa. They were charged with treason for supporting the Freedom Charter, which called for a non-racial and socialist-based economy.


"Those who cannot remember the past are condemned to repeat it"

You have to know the past to understand the present 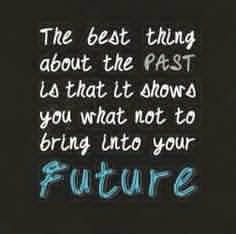 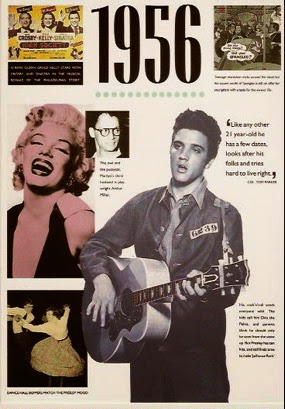