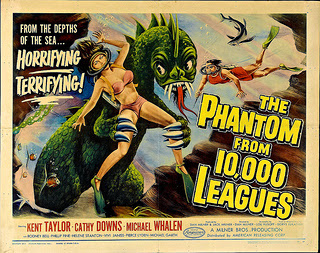 The following account is based largely on rumours and stories that were circulating during the year 1955 and which have persisted since. Any official files that may have referred to the mystery of “The Phantom from 10,000 Leagues” have presumably been either lost or destroyed over the course of time. Archived reports from local Californian newspapers have been accessed and we also have the stories and accounts passed down to the family members of those who were allegedly involved in the events surrounding “The Phantom Mystery.” 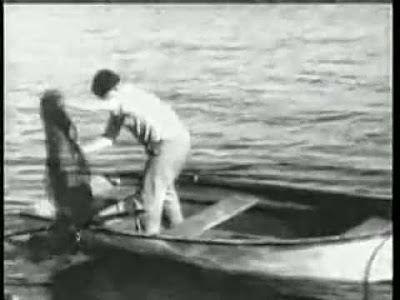 Reconstruction:
Fisherman prior to encountering "The Phantom"

The incident that is the subject of this chapter occurred in 1955 with reports of a series of deaths involving fishermen. A government investigator for the U.S. Department of Defense, William Grant and a marine scientist, Dr Ted Stevens soon turned up to investigate. Unknown to Grant, Stevens had been assigned to work undercover on the case. He used the name Ted Baxter and pretended to be a beachcomber and tourist. 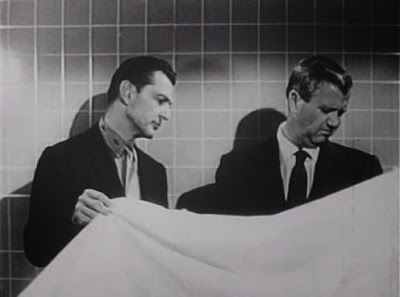 Only known photo of Stevens & Grant


together: Context unknown.
Possibly examining body of a dead fisherman.

It was reported that Dr Stevens later made a test dive where he supposedly spotted a mysterious light as well as a strange creature. According to the legend the creature had arms and legs, with a row of spikes running down its spine. The photo presents a mock-up representation of the marine phantom…. 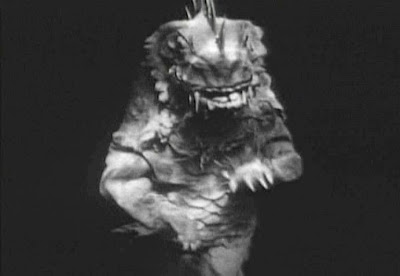 It was also reported that after Dr Stevens reached safety, he informed Prof King that the fisherman found earlier on the beach had died from radiation burns and not from natural causes. It appeared that an unexplained source of atomic power on the ocean floor was being guarded by the” Phantom Monster.”

In reality Dr Stevens was a scientist famous for his experiments on the biological effects of radiation on marine life. As has already been stated, he had been investigating the nuclear light source and the monster, and was reportedly worried that the light in the ocean was man-made and could have been transformed into a dangerous weapon. Furthermore, he theorized that the monster obtained sustenance from the light and concluded that the Phantom and the light had to be destroyed.

Oceanographer Prof King, who worked for an oceanography college on the Pacific coast, had been conducting experiments and it was apparently his experiments that had something to do with the strange Phantom Monster. The Professor was apparently trying to use his discovery to create a "Death Ray" that could be used by the US military. Stevens, however, revealed that King was not under suspicion because it was determined that negotiations to sell the professor’s atomic inventions had been taking place. It turned out that it was the professor's own assistant, George Thomas who was seeking to turn over the atomic-secrets to a foreign power, most likely the former Soviet Union.

It was discovered that George Thomas had a lover, known only as “Wanda”, who was a secret agent for the Soviets. She was using Thomas to obtain information about the nuclear light created by King, and to prevent Grant's investigation from proceeding further. As part of this plan, George Thomas sabotaged Grant’s diving gear.

Grant meanwhile met with Ethel Hall, Dr King's Secretary and revealed to her that her son died while collecting specimens for King. He then persuaded her to obtain a wax impression of King's lab keys. Ethel was to later use the keys to gain access to King’s lab in order to search it.

Later on as Grant and Stevens were preparing for their dive, the poison that Thomas has earlier inserted into their scuba gear almost knocked out Grant. After Stevens revived Grant, the two men made their descent. It wasn't long before both men encountered the phantom but they managed to evade it and reach the surface safely.

It was suggested that after Thomas revealed to Wanda that Ethel had met with Grant, he was ordered to take care of Ethel. As Ethel proceeded to the beach to meet with Grant, George Thomas, who was said to be lying in wait, killed her with a spear gun before she could keep the rendezvous with Grant.

Fortunately Thomas’ activities were soon uncovered and he along with the foreign agent, “Wanda” was arrested.

Interestingly the investigation into Ethel’s murder concluded that she was killed by George Thomas, who it was stated was deranged and suffering from a severe a psychiatric condition. He was committed to a psychiatric facility where he passed away in 1956. Cause of death: a cerebral haemorrhage.

The whereabouts and fate of the woman called “Wanda” remain unknown. 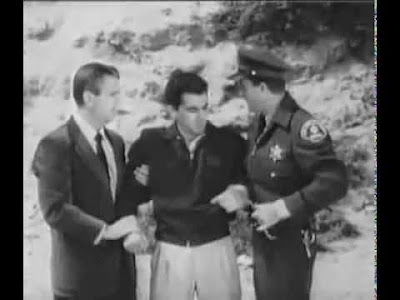 George Thomas being restrained and led away by agent Grant and sheriff.

After the sheriff confirmed that George Thomas had killed Ethel and had earlier shot at Grant, Grant urges Prof King to provide the necessary information to destroy the light source and the “Phantom Monster.” King finally revealed that he had indeed activated a uranium deposit in the ocean floor in order to create the nuclear light. He then requested the others to give him an hour to consider Grant’s proposal.

As King’s daughter, Lois accompanied Ted Stevens to the lab in order to find her father, they both witnessed a large ship explode in the ocean apparently as it passed over the nuclear light.

After witnessing the same ship exploding off the coast, the professor probably came to the realization that the undersea weapon and the strange monster would have posed a great danger to humanity. It was later surmised from the destruction and upheaval in King’s lab that having witnessed the explosion and being overcome by guilt at what he had caused; he attempted to destroy all evidence of his life’s work.

It was also conjectured that Prof King then rowed out to the cove and planted dynamite in order to destroy the nuclear light along with his monstrous creation. King may have been seized by the “phantom Monster” before he could escape, and was killed in the explosion along with the monster, or his guilt may have been too much to bear and he committed suicide. Lois and Ted’s children maintain that it was probably the former scenario.

As a result of Prof King’s actions, the light was permanently covered up. Just prior to Ted Steven’s death in a Californian nursing home several years ago, he was reported as having commented on the events surrounding the “Phantom From 10.000 Leagues” mystery, where he concluded that Prof King had paid for his mistakes. He was said to have at last remarked on the Phantom incident when muttering over and over, “he (King) paid for his mistake. Nature has many secrets that man mustn't disturb – and this was one of them!” 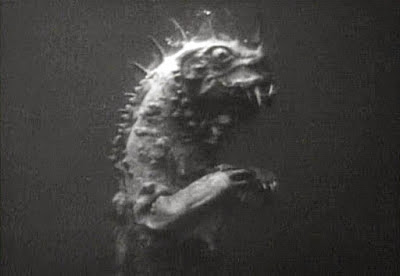 Lois and her husband, Ted never commented publicly on the Phantom incident throughout the remainder of their lives (except for Ted's alleged rambling reference at the nursing home. Grant was reassigned to unspecified duties at an undisclosed location. Until further hard evidence is turned up, perhaps we will never know…… 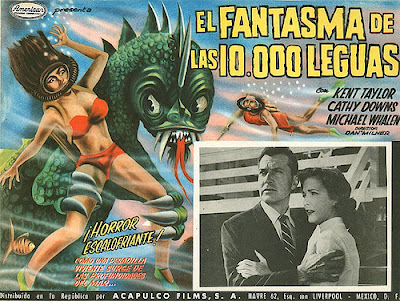 The Phantom From 10,000 Leagues ended up as the bottom half of a double-bill, below Roger Corman’s science fiction film debut as director of The Day The World Ended. 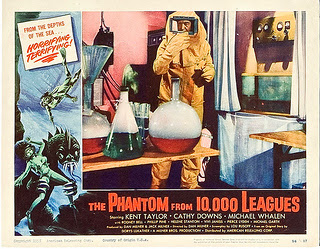 Despite reluctance from various distributors to buy the two films, they were both a commercial success due to the marketing skills of James H. Nicholson. Within two months of release the films had earned $400,000. 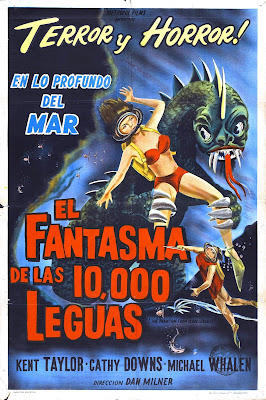 The film’s low budget was reflected in its flimsy sets such as Prof king’s home, the concealment of the professor's death ray project behind a curtain; .the same single boat used in all the scenes and that damn same stretch of beach. 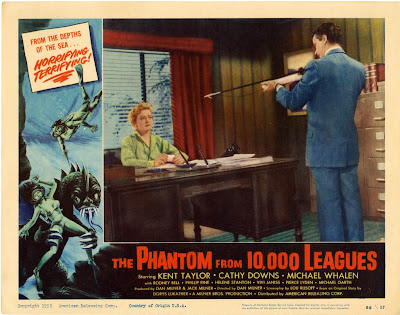 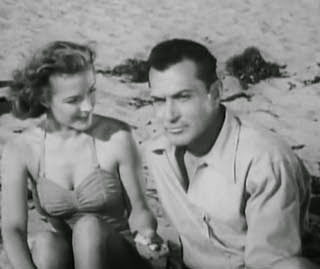 
And what exactly was the phantom monster doing to the fisherman’s leg underwater at the start of the film? It was like watching a frisky canine trying to copulate with a person’s leg! 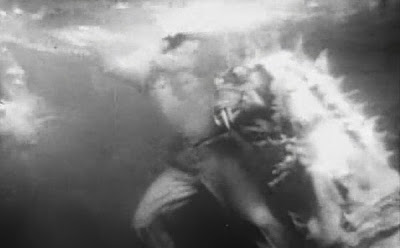