What would cause a little girl to be wandering alone out in the desert? What has happened to have given her sightless eyes that seem to have seen too much? What has stretched the fabric of her psyche to form an unresponsive protective psychological bubble shielding her from horrific memories of real-world horrors too vast for a young innocent mind to grasp? The answer lies with…….. 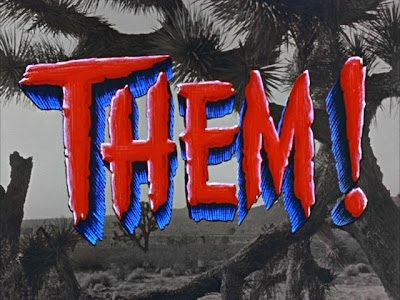 Near Alamogordo, New Mexico, Police Sgt Ben Peterson and his partner find a young girl wandering in alone the desert. To Sgt Peterson it “looks like she’s in shock.”

The two state troopers investigate a trailer situated “12 Miles North Of The Crossroads” that the little girl was staying in with her parents and sibling. The trailer presents a whirlwind scene of destruction and tragedy. From this point on the police are confronted with “lots of evidence with clues, but (where) nothing adds up.”

Clue 1: Money not taken
Clue 2: Presence of blood
Clue 3: Revolver located
Clue 4: Top of girl’s doll’s head found sliced off.
Clue 5: “This (side of trailer) wasn’t caved in. It was caved out.”
Clue 6: SUGAR
Clue 7: Mysterious print found nearby: “No cat ever lived laid down a print like that.”
Clue 8: The fabric of reality being rent by a strange, unearthly, piercing and pulsating sound that momentarily triggers a reaction from the little girl. The ambulance medic seeks a more earthly and rational explanation for the sound as being the wind which “gets pretty freakish is these parts.”


And so the investigation is carried along with the desert wind to old Gramps Johnson’s store. Once again a scene of destruction confronts the two troopers, along with more clues. As they look around, the radio broadcast informs listeners about “strides in the field of medicine” with cholera and sleeping sickness having been wiped out in many areas. Human beings are capable of much good, but as it later becomes apparent they are capable of unleashing great evil upon the world, even unwittingly. And outside Death continues to moan and howl across the desert and through the gashes in the walls of Gramps Johnson’s mutilated store.

Clue 1: "Gramps" Johnson is found dead: “Looks like he was dragged and thrown down there.”
Clue 2: The store has also been torn apart from the outside: “This wasn’t pushed in; it was pulled out.”
Clue 3: No cash was taken from the register.
Clue 4: A barrel of SUGAR was smashed open. Ironically the tiny ants on the sugar are disturbed by Peterson’s fingers.
Clue 5: Gramps' Winchester rifle was fired and is now twisted out of shape.

Peterson leaves Ed Blackburn to guard the store alone as he goes by car to check on the little girl and make a report. Upon hearing the strange, pulsating noise outside, Blackburn cautiously investigates. We are left to imagine the nightmarish horror as Blackburn moves off-screen and off-camera gunshots are fired. The strange pulsating sound speeds up and grows in intensity, and Blackburn's death-scream is carried aloft by the wailing wind.


Further clues emerge when Peterson's superior points out that Gramps was a crack shot and had time to fire all his ammunition at whatever attacked him. Added to this is the coroner’s finding as to the cause of Johnson’s death detailing a litany of horrific injuries: a broken neck and back, skull fracture, crushed abdomen, and ……."enough formic acid in him to kill 20 men."

As a way of confirming his suspicions, the senior Dr Medford later tries an experiment (a “jolt”) on the Ellinson girl by exposing her to formic acid fumes. She quickly awakens from her catatonic state of “hysteria conversion” and begins screaming and yelling out, "Them! Them!" 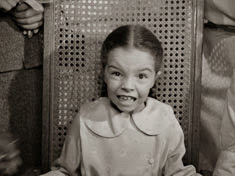 For the viewer, anything that can produce that much terror in one so young must by its very nature be evil and must be eliminated. We have enough examples in the real world and our own time of innocent children having to endure the trauma and horrors of death and destruction from monsters of human-kind’s making.

Dr Harold Medford will not at this point reveal his theory as doing so prematurely might “risk a nationwide panic." Shouldn’t people have the right to know about matters that might affect them, instead of being treated like children and wrapped in the security blanket of secrecy? 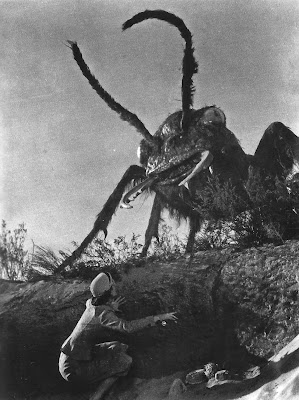 While investigating the Ellinson campsite, Dr Pat Medford is confronted and startled by a giant, eight-foot long scouting ant. The images conjured up in our minds from the clues and the conjecturing up to this point in the film is confirmed by the presence of an impressive-looking Gulliver of the insect world. Pat’s screams of terror bring the upholders of the law racing to her rescue brandishing.38 revolvers which with great alacrity they proceed to empty into the six-legged leviathan with little effect. Dr Harold Medford then instructs Peterson and Graham shoot at the ant's antennae thereby blinding it. This they do and Peterson uses his Thompson submachine gun to extinguish the ant’s life once and for all. 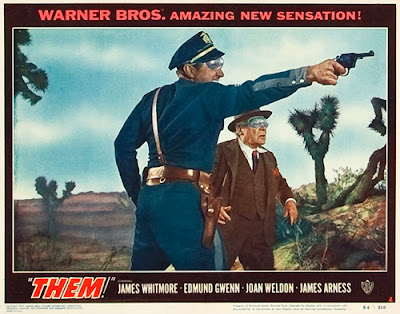 Victory at this impressive skirmish is merely a prelude to a greater battle with the very existence of humanity being at stake. Dr Harold Medford finally reveals his theory that the giant ant was probably mutated by radiation from the first atomic bomb test near Alamogordo 9 years previously. He believes that, “we may be witnesses to a biblical prophecy come true”;


“'And there shall be destruction and darkness come over creation, and the beasts shall reign over the earth.’"


(OK, so it’s not from the bible. Blah! Blah! Still, it’s biblical / Revelations-sounding and adds a bit of a dramatic flourish to what is after all a good screen story. So get over nit-pickers!) 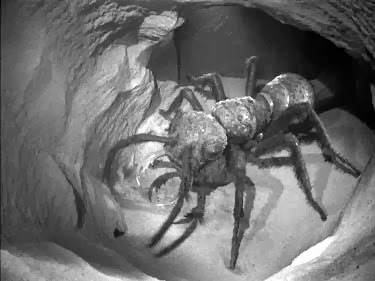 The Medfords, Graham and Peterson, together with Air Force General O'Brien manage to locate the giant ants' nest by helicopter. Dr Medford states his belief that “time is important, more so than (any of them) realize” and he comes up with a plan to destroy the ants in their nest by bombing them during the hottest part of the day, “noon tomorrow.” The plan involves using enough heat to drive the ants down into their nest and then drop cyanide gas to kill them.

After an impressive display of bazooka-firing at the ants’ nest opening, poison gas bombs are then tossed into the nest. After the obligatory 1950s-style, “this is no place for you or any other woman” followed by the retort, “someone with scientific knowledge has to go” hassle, General Graham, Peterson and Dr. Pat Medford descend into the nest to kill any surviving ants.

Deep inside the nest, we witness an impressive display of the use of flame throwers and the depiction of giant ants tunnelling into the corridor. Equally impressive is Pat’s commanding and authoritative tone of voice as she orders the others to “Burn it! I said, burn it! Burn everything!” Who would dare argue? Ogle and patronize all you want Ben and Robert, this lady knows what’s what and takes charge-get used to it!

The Beginning Of The End Of….. 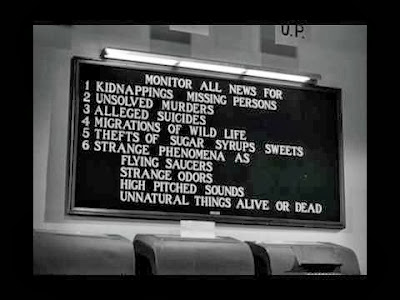 It appears that two other queen ants have hatched and along with winged male ants have left to establish new colonies. Dr Harold Medford believes that “we haven’t seen the end of THEM. We all had a close view of what may be the beginning of the end of us.” The dire nature of the emergency is repeatedly reinforced by Dr Harold Medford when he states that “not a police force in the world can handle the panic” that would result from public disclosure. He believes that the ants’ 50 million years’ worth of evolution have bestowed on them the kind of industry, social organisation and savagery that “makes man look feeble.” Dr Medford can only conclude that “Man as the dominant species on earth will be extinct within a year.” In order to avoid generating panic, the government soon launches an investigation of any reports of unusual activity, including sightings of "flying saucers." 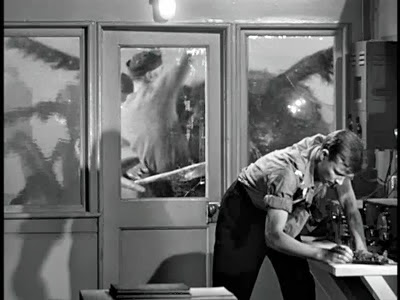 Meanwhile, a giant queen has managed to hatch her brood in the hold of a freighter, SS Viking, heading to South America. The giant ants attack the ship's crew and only a few survivors manage to escape and are rescued. The freighter is later sunk by US naval power.

Further reports lead the investigators to a rail yard with a smashed boxcar minus its 40 ton cargo of sugar purloined by the six-legged kleptomaniacs with a sweet tooth. Next, they pay a visit to a state psychiatric hospital in Brownsville, Texas and interview a pilot who swears that while flying his small plane he almost collided with three UFOs “shaped like ants.” Agent Graham while believing his story, requests that “the government would appreciate it if he were kept here” In other words, to have his civil and legal rights violated by being forced to remain hospitalized until further notice. An act worthy of any Soviet or Chinese Communist government of the time!

Information from an alcoholic in a Los Angeles hospital drunk ward together with the body of a mutilated man is connected to a report of a missing man and his two young sons. This leads the investigators to determine that the man had been flying a model airplane with his sons near the hospital in close proximity to the Los Angeles River and that he was killed by the ants.

With martial law and a curfew declared for Los Angeles, the hunt is on to see;

If the two young boys can be saved!

If the ants’ nest can be destroyed before any other ant escapes!

If the world as we know it can be prevented from being destroyed by….. 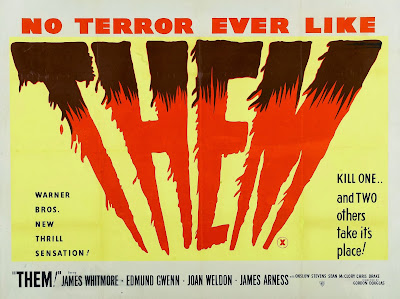 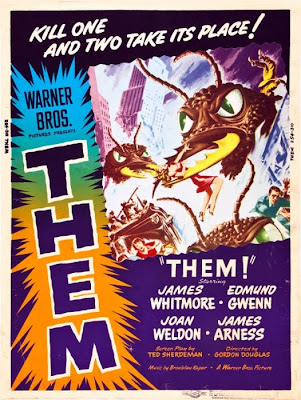 The film Them! reflected Cold War era fears and concerns about of the effects of nuclear technology on our planet and human civilisation. In this case the effects are manifested in the form of creatures being exposed to radiation and growing to unnatural sizes. The film was the first of the "big bug" movies whose lineage includes Tarantula, Earth vs. The Spider, Beginning of the End through to Alien and Starship Troopers.

The film's opening title was printed in a vivid red and blue against a black and white background which leaps out at the audience and gives the opening of the film a strong dramatic impact. When the film began production it was originally intended to be in 3-D and Warner Colour. During pre-production when it was time to shoot the 3-D test, the 3-D camera rig malfunctioned and no footage could be filmed. It was consequently decided that the colour and 3-D aspects of the production were to be scrapped. The film was to be shot in black and white and widescreen, but even the widescreen format was scrapped. The opening titles and the flamethrower shots aimed directly at the camera are the only remaining camera set-ups for 3-D in the film.

Among the many features that make this film work include: 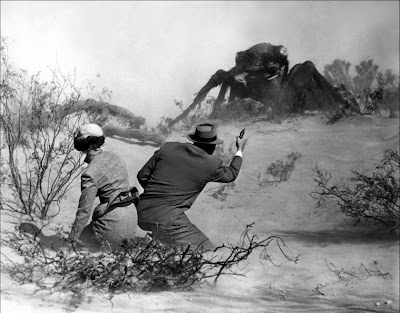 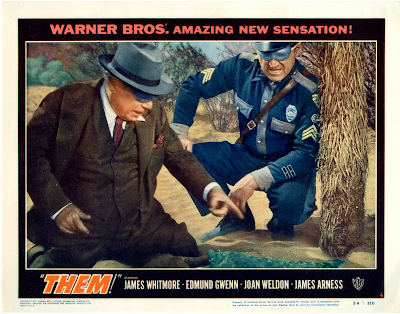 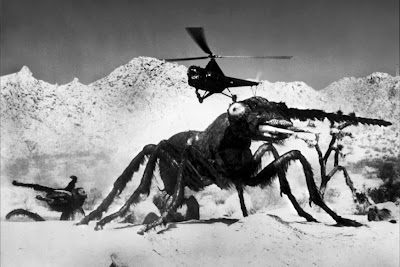 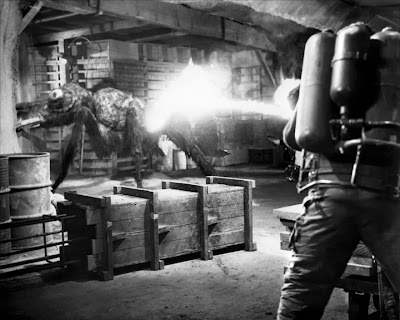 You may have noticed that there are similarities between Them! and movies such as James Cameron's Aliens (1986.) which featured an orphaned girl “Newt” wandering around a base in shock, an almost hostile and windy setting, passageways with danger lurking around the next turn, alien creatures armed with deadly acid, egg laying queens and hatchery chambers and lots of flame-throwers! I guess modern Sci-Fi blockbusters owe a great deal to such a well-acted, frightening, and engaging 1950s progenitor film as Them! 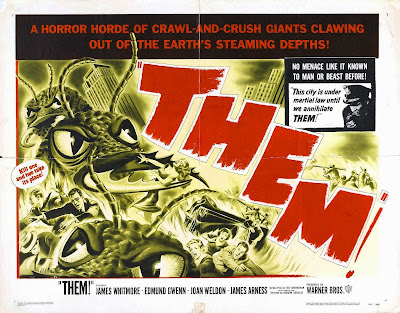