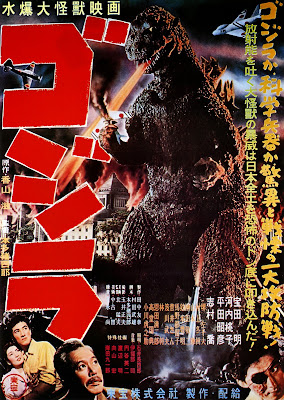 
American nuclear weapons testing has resulted in the creation of an almost invincible, prehistoric-looking beast that makes T-Rex seem like a cute little kitten by comparison. Japan is often faced with an onslaught of natural and man-made destructive forces that seem beyond its control to stop: earth quakes, tsunamis, atomic weapons devastation, nuclear power plant radiation. Now it is the turn of… GOJIRA!

Join us as we follow this monster after its awakening as it embarks on its mad rampage of destruction toward Tokyo crushing ships, flattening villages, and demolishing buildings in its wake. Can this menace be stopped before it destroys not only Japan but the rest of the world as well?


…..An investigation into the sinking of the boat, Eiko Maru is presently being conducted. The cause of the sinking is still a mystery, though an explosion is suspected. A rescue vessel, "Bingo Maru" that was sent to the location of the sinking appears to have suffered the same fate as the Eiko Maru.

The Coast Guard has assured the frantic families of the crews of the two ships, that everything is being done, including committing more ships and helicopters to the search………


……three survivors have been located in the water; however, there have been reports of the sinking of another fishing boat bringing the total of lost ships so far to three.

The inhabitants of Odo Island spotted a raft containing a Mr Masaji Sieji who lives on the island. According to the islanders who pulled the raft in, Masajis, before he passed out, declared that "A monster did it!"


…….During an interview before a group of journalists and military personnel, rescued survivor, Masajis Sieji claimed that a monster was responsible for the sinking of the boats. The inhabitants of Odo island have a belief in the legend of “Godzilla.” The legend apparently makes reference to sacrifices the islanders used to make in order to keep the creature, Godzilla happy. These days, however, they stick to performing a religious ceremony.


Ladies & gentlemen, we apologise for this interruption to scheduled programming, but incredible events at Odo Island seem to confirm recent reports concerning the sinking of several vessels and the likely cause of their sinking and disappearance. 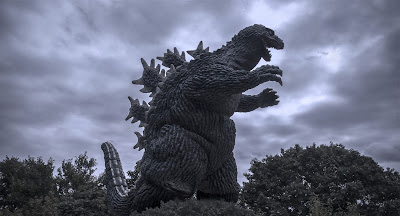 What you see now is vision of a huge reptilian creature…. Wait! It appears to be rearing up and is roaring at the villagers….. We are now following its progress as it continues on, enters and eventually disappears into the ocean… We now have a shot of what appears to be a series of tracks left by the creature along the beach. 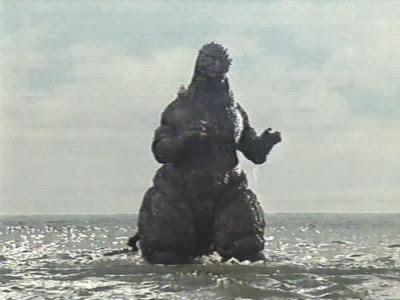 We now go to our reporter Ishirō Tamai who is on hand at Odo Island.

Thank you, Kazuji. During a previous night as a typhoon struck the island this creature had apparently destroyed 12 houses and was responsible for the deaths of 9 people. Discussions between the mayor and eyewitnesses suggested that the destruction of the houses was unusual, and was not caused by the storm.

Palaeontologist, Professor Kyohei Yamane had organised a scientific task force to go to Odo Island to investigate the situation. On the island the team managed to detect radiation around the ruined buildings and in the water wells. A series of huge shallow depressions were detected and measured and it was concluded that the depressions were in fact giant foot prints. A trilobite - a creature extinct for millions of years-was also found in one of the depressions. We can only conclude from this……..


Recent reports have claimed that up to 17 ships have been lost in Japanese waters because of a giant creature which has been given the name of, “Godzilla.” Judging by all reports, this creature is far more formidable than the Rhedosaurus we not long ago had to contend with. 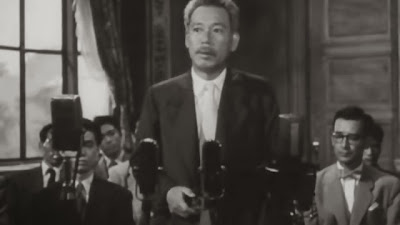 A meeting was convened to discuss the findings of an expedition to the Japanese island of Odo organised by palaeontologist, Professor Yamane. At the meeting, Professor Yamane surmised that Godzilla is a relic from the age of the dinosaurs and that it has been disturbed by recent US hydrogen bomb tests in the Pacific. He displayed a trilobite apparently located in the creature’s footprint and radioactive sand found on the island as proof of his argument.

A special agency has been set up to look into ways to counter the creature before all international trade has to be stopped with Japan. The Japanese navy has now gone into action depth charging any areas that the creature, Godzilla was last seen.


Interviewer: Considering all that has happened, isn’t it imperative to our safety and national security to use all means at our disposal to destroy this threat?

Yamane: ….Yes, I understand that Godzilla needs to be destroyed but I also feel that the creature deserves to live.

Yamane: Well, it was we, after all, who disturbed and created the creature with our atomic testing. I just want to understand what caused everything to turn out the
way it did……. 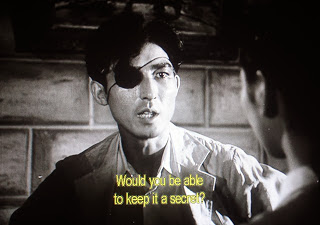 
Emiko has been pressing me for more information concerning a device I have developed that could destroy Godzilla. Up until now I have denied such a weapon exists, and have even refused to disclose what I have really been working on. I relented and showed Emiko what I was doing, and swore her to secrecy. In my lab she was understandably shocked when I showed her the process whereby a tank full of fish is turned to skeletons in mere seconds. My device sucks all oxygen from water causing any living creature caught by the process to liquefy instantly.

To reveal the weapon to the world would unleash a force greater than even the atomic bomb. The only difference between the two is that the oxygen destroyer could ultimately kill all mankind.

I know that once I use the weapon the genie will be out of the bottle and I do not know if I or anyone else can get it back in. I cannot see any way to resolve the dilemma……. 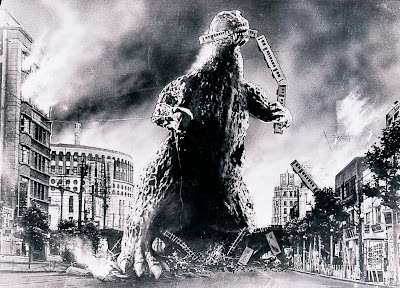 
…..You can now hear the wail of sirens. The unearthly thundering steps and malevolent roar of the creature can also be heard in the distance. As Godzilla nears the shore the army is opening fire with all the heavy weapons they can muster…… Ignoring this firepower, Godzilla has now come ashore ……..He has destroyed a train like it was a toy! The people…. He is now heading toward the downtown area………. the army is valiantly (static)…The monster has destroyed the (inaudible) bridge…. (inaudible) now heading back to sea…..


With help from scientists from all over the world, we have formulated a plan to defeat the creature. The plan consists of the following; 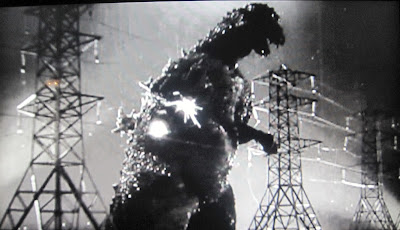 
It is now nightfall and Godzilla again heads for the shoreline. The newly installed electrical barrier has been charged and the army has taken up position with heavy artillery and tanks….Wait a minute! Godzilla has paused at the barrier and the army is seizing the opportunity to attack…..(sound of gunfire and artillery drowns out reporter’s voice) ….fires erupting all across the city …..fiery mist blasting from its mouth, its…………(static and silence). 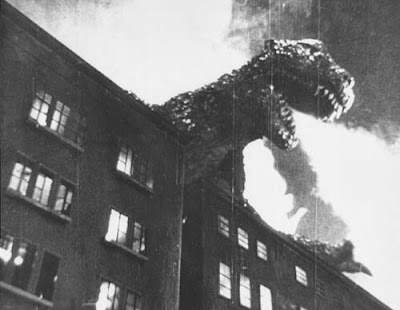 Code 129 has been initiated. I repeat, Code 129 has been initiated! Overhead, we can see a wing of fighter aircraft attempting to distract the creature…..You can probably hear the roar of their engines as you witness the scene of absolute destruction and carnage around us….. The attack appears to be working! What you are seeing now is Godzilla retreating back to the waters of Tokyo Bay…..

Rescue efforts have now switched to high gear, but the sheer numbers of wounded people, many of whom are suffering radiation sickness is completely overwhelming hospitals like the one I am presently speaking from. Despite all the best efforts, it has been acknowledged by some government sources that there can be little hope for the survivors. All people here and all over the country can do now is pray that Godzilla will not return……

(Excerpt from Serizawa’s diary after viewing the TV report)


I now realize that I must act and deploy the weapon. Before I do so I must destroy my data, equipment, lab notes and when the time comes……..


Thanks to the installed Geiger counters our ship has managed to locate Godzilla. Salvage expert Orgata is preparing to make the dive to deploy the new weapon that will hopefully destroy Godzilla. Scientist Dr. Daisuke Serizawa appears to be insisting that he accompanies Orgata on his dive. They will only have one chance and one weapon with which to accomplish the task, so it has to be done properly

After what seems like an eternity, Orgata has resurfaced-alone! He is removing his face mask and he appears to have a look of bewilderment on his face. Where is Serizawa?

Great news! Dr. Serizawa has managed to detonate his Oxygen Destroyer in the ocean. Godzilla was caught and has been eliminated by the weapon. Unfortunately, the brave doctor Serizawa was also killed. We can’t begin to describe the debt that japan and indeed the entire world owes him.


Professor Yamane would like to say a few words before we cease transmission:


“Thank you. We were successful yes, but we were lucky this time. I say ‘this time’ because I believe that there must be more Godzillas out in the depths of the ocean. If we continue our experiments with atomic weapons, and proceed down paths that threaten our existence, chances are extremely high another Godzilla of our own making will rise again to plague Japan and once again threaten our civilization. Godzilla was for us a god of destiny and we humans deserved this hell of our own making. We must never again re-awaken the evil and destructive primordial forces that reside deep within us, for it will only turn back upon us and consume us utterly.” 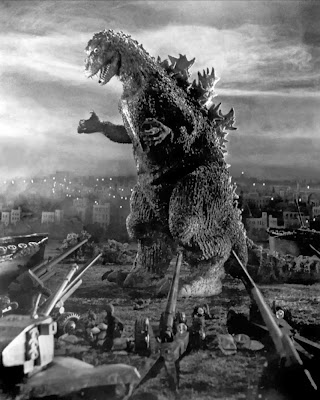 Ishiro Honda's Godzilla has cemented itself well and truly in film history. It is generally considered to be an allegory for the destruction and devastation unleased on Japan by the atomic bomb, with the 400-foot-tall mutant dinosaur Gojira, serving as the visual metaphor. One can only imagine the impact this must've had on Japanese audiences sixty years ago with memories of what took place only a few years previously still fresh in their minds. Godzilla's attack recalls the same kind of horrors the Japanese experienced near the end of World War II, with the atomic bombings of Hiroshima and Nagasaki. 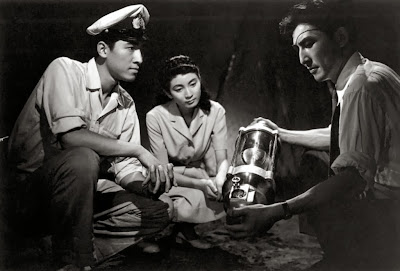 The compelling love triangle between Ogata, Emiko and a Serizawa together with the dramatic sacrifice made at the end of the film adds to the film’s emotional impact.

Despite the low-tech special effects, the clever use of camera angles and city building miniatures, as well as Akira Ifukube’s destructive, thumping and pounding theme music for Godzilla, combine to create the impression that Godzilla is an impressive and implacable force of nature or destructive demon. 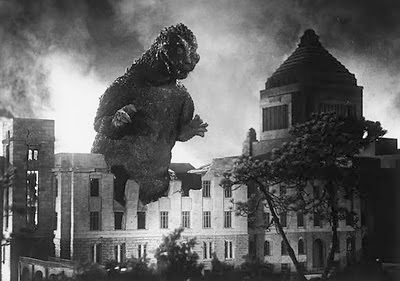 Godzilla appears to have been inspired by the success of the 1953 hit, The Beast From 20.000 Fathoms with its own awakened monster, the Rhedosaurus which appears in this blog.

What about the name, “Gojira?” As a result of a competition held at the time, it seems to have been derived from a combination of the Japanese words Gorilla (gorira) and Whale (kujira). 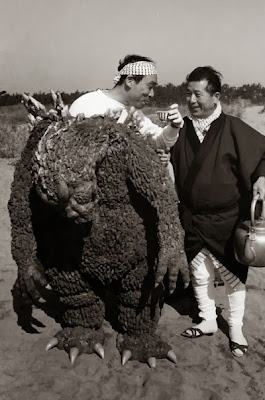 The Godzilla suit was decided on due to the stop-motion animation method being far too costly and time-consuming. The poor stuntman wearing the suit would suffer numerous bouts of heat exhaustion and dehydration. The suit had to have a valve to drain the sweat from it and in order to avoid suffocation, it could only be worn for three minutes. 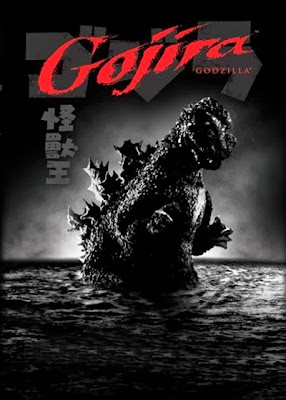