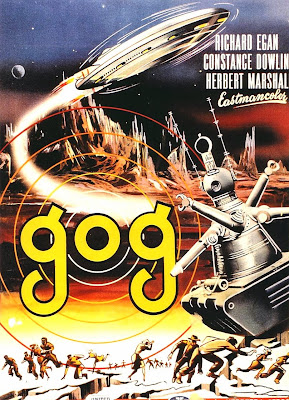 A successful combination of sci-fi, murder mystery and espionage thriller. Slow-paced at times but raises issues of relevance for today’s audiences. 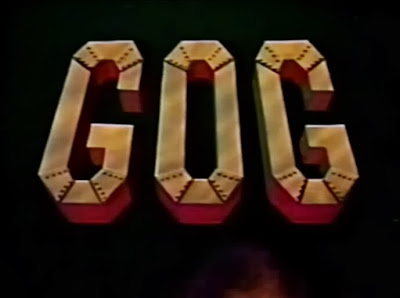 The film, GOG is set in a top-secret government facility under the New Mexico desert where a space station (“Man’s first attempt to conquer space”) is being constructed, OSI (Office of Scientific Investigation) agents from Washington, DC, are called in to investigate mysterious and deadly malfunctions at the facility. 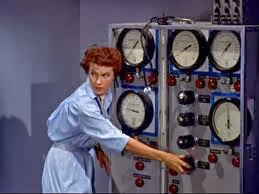 We witness one such occurrence at the start of the film, GOG where a lab monkey is undergoing an experiment in freezing and thawing. After the experiment successfully concludes Dr. Hubertus, the department head, is trapped in the cold chamber when the door to the chamber mysteriously closes and the automated equipment begins its deep cold cycle. Hubertus is frozen solid. Dr. Kirby returns to the cryo lab and discovers the dead and shattered remains of Dr. Hubertus when suddenly the door closes once again and the cryo cycle repeats, killing her as well. 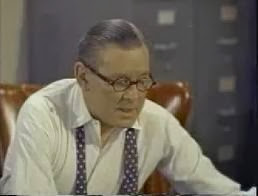 Agent Dr. David Sheppard has been called in by Laboratory supervisor Dr. Van Ness to find the cause of such mysterious deaths among the 150 top scientists at the facility. Together with Joanna Merritt, an OSI agent already stationed at the facility and who is secretly in a romantic relationship with Dr Sheppard, Sheppard determines that the deaths are due to deliberate sabotage of NOVAC (Nuclear Operative Variable Automatic Computer), a central computer which controls all equipment in the underground facility. NOVAC was built in Switzerland and took five years to complete, and Zeitman was the designer. 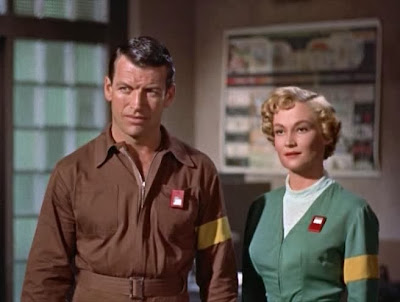 The important question is, how is the sabotage is being performed? How will they later be able explain the deaths of six scientists, as well as the complex's Chief of Security, Major Howard? 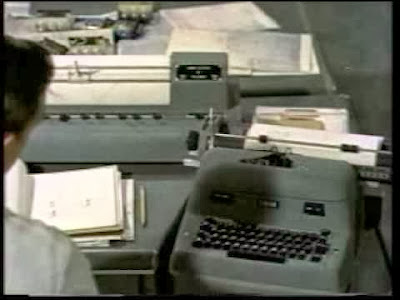 The answer to the mystery is found by Sheppard. It turns out that a powerful radio transmitter and receiver were incorporated into NOVAC during its construction. The unnamed “enemy” have constructed a stealth jet plane that can fly faster than the speed of sound and is made of fiberglass which makes it difficult to be located by radar. As it flies above the facility, ultra-high frequency radio signals are beamed from it, allowing the “enemy” to control NOVAC. The plane can apparently fly over 100.000 feet high and it is observed that “no plane has ever gone that high,” to which Joanna replies, “At least not from this planet.” By controlling NOVAC, the “enemy” also gains control of the two powerful robots at the facility, Gog and Magog, who Dr Zeitman believe will one day “guide rockets into space.” 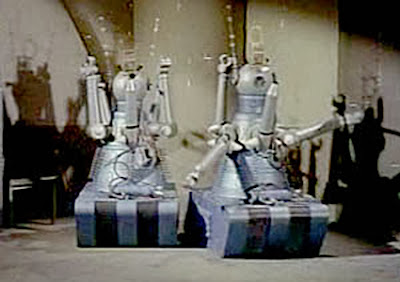 Who is causing the deaths of crucial personnel at the underground facility?


Where did such an advanced aircraft come from?
What nefarious purposes will NOVAC and the robots, Gog & Magog be put to?
By whom? 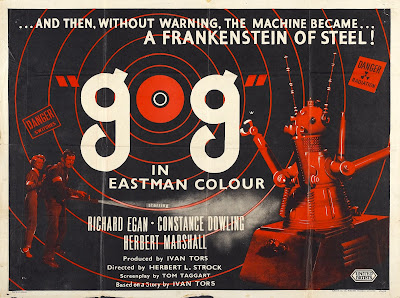 The film, GOG was shot on two sets at Hal Roach Studios, with exteriors done at George AFB, a former Air Force base near Victorville, California. It took just 15 days to shoot all of the footage for the film. 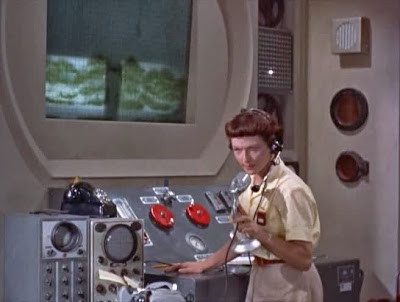 The film at some points does become a bit plodding and tedious such as when security officer Sheppard and his undercover security agent girlfriend Merritt take us on a guided tour of the base. This, together with the long-winded lectures concerning scientific experiments, may have been intended to highlight the positive features of future technologies, but for today’s audiences it seems a bit dated and unimpressive. 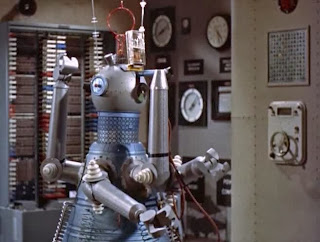 What is more interesting are the dangers, fears and insecurities associated with the “new” technological developments depicted in the film; concerns that are relevant even for 21st. Century audiences who are becoming more aware of the almost anonymous destructive potential of military applications of “smart” technologies. There is also the issue of who is really in control when it comes to information and personal privacy in a digital age, particularly when such notions as, “the security of the nation is at stake” are used as justification for employing technology as a means of control and intrusive monitoring of people. 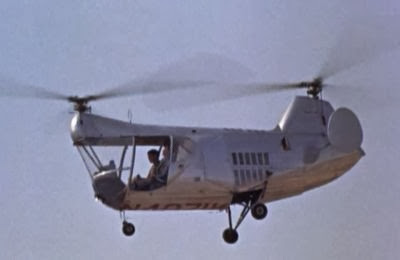 The double-edged sword nature of human technology is apparent when early in the film we see a helicopter cross the desert sky. On board is the pilot, Al and his passenger, Dr. David Sheppard. They are headed for the top secret underground facility. Suddenly the helicopter is buffeted by some force. The pilot explains that the "brain" has taken over the controls and will do the flying, thereby keeping the exact location of the facility secret. They are both being monitored by central control. Instead of being reassuring. it’s all a bit unnerving! NOVAC’s code transmitters will also be in control of the solar mirror which will provide the space station with all its power and its destructive potential as demonstrated by the Elzevirs’. NOVAC will be able to control the space station’s mirrors via code transmitters and as is noted by one of the characters in the film, “It would be a powerful weapon of war.” 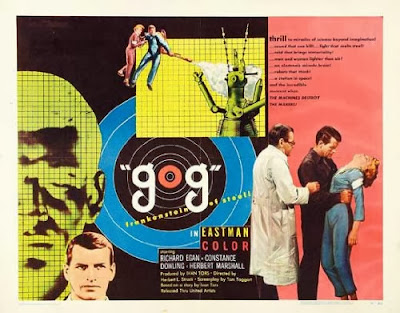 Those in the facility have arrived at point where, as Joanna observed, since “the machines took over….we live here like ground hogs.” In addition to an “enemy” possessing intrusive, dangerous and destructive technologies that have led to a fearful, siege-like, underground fortress existence, we learn later that Van Ness has "positive proof of a saboteur” on his staff. Code transmitter devices have been located around the facility. We also learn that unknown even to her boss, Van Ness, Joanna Merritt, as part of a secret mission, has been assigned to the project by the security services that employ Sheppard. At one point, even the illustrious Dr. Zeitman is reprimanded by Sheppard about failing to abide by security regulations (“You’re not above the security of the nation.”) 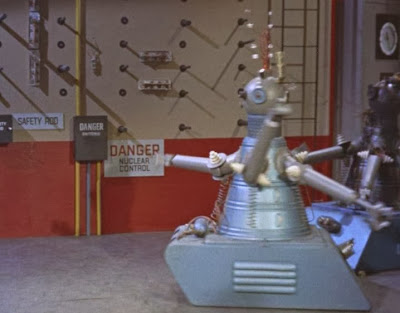 Fear, suspicion, security concerns: all very apparent even years after the Cold War era with the revelations from Edward Snowden concerning NSA surveillance activities, the US monitoring of the German chancellor Merkel’s phone, as well as Australia’s Signals Directorate secret monitoring of Indonesian Prime Minister, Susilo Bambang Yudhoyono’s and his wife’s phone communications. Unlike the Cold War era animosity between the US and Soviet Union, these modern instances of international mistrust, fuelled by intrusive technological surveillance, are occurring between allies! We won’t even get started on allegations concerning certain Chinese mobile phone and electronic instrument manufacturing companies installing surveillance devices in their products in order to access information from the users of their products. Fancy being able to hack into someone else’s electronic device (computer, Novac, mobile phone, Gog, data base, Magog) and exercise control over it? Who would have thought such a thing could possibly happen back in 1954! 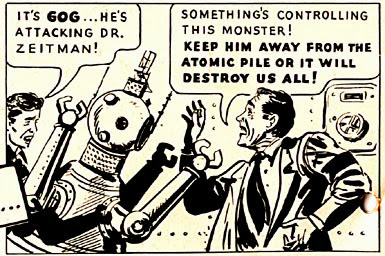 The film, GOG employed an interesting choice of names for the two robots; “Gog” and “Magog.” Initially, this one word title, together with its appearance on the screen at the start, conjures up feelings of timeless and implacable power. The biblical reference to “Gog” and “Magog” (Rev.20:8) involves the names of two nations to be led by Satan in the final battle at Armageddon against the kingdom of God;

“When the thousand years are over, Satan will be released from his prison and will go out to deceive the nations in the four corners of the earth - Gog and Magog - to gather them for battle. In number they are like the sand on the seashore.”


Perhaps for the purposes of film the “enemy,” the former Soviet Union, was being cast as Satan in the international battle between the forces of “good” and “evil” over the fate of the world.

Other issues raised by the film also have relevance to our era and they include; 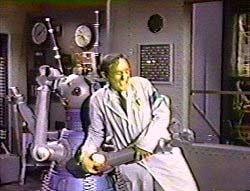 Advanced weaponry and security devices: In the film during the segment featuring the electronically controlled sound detector with its tuning forks, we are introduced to the notion of sound waves whose “intensity can kill!" It has been demonstrated in recent times that sound waves of certain frequencies can have quite severe effects on human physiology. Proposals have been made to use sound waves as a form of crowd control during riots and demonstrations and even as a weapon of warfare.

Surveillance & Privacy: The personnel in the underground facility are subject to constant monitoring from various devices such as microphones. In our modern era, we are surrounded by devices that can monitor our actions and movements. Among such ways and means of monitoring individuals include, computer & mobile phone tracking & usage; ATM & credit card transactions; speed cameras: cctv proliferation in major cities; public transport, taxi and department store camera surveillance and more. It is amazing how we have willingly submitted to this intrusion into our personal privacy and right to anonymity. It has become a normal state of affairs for us all and we justify it (rightly or wrongly) in terms of it being necessary to guarantee our overall safety and security. 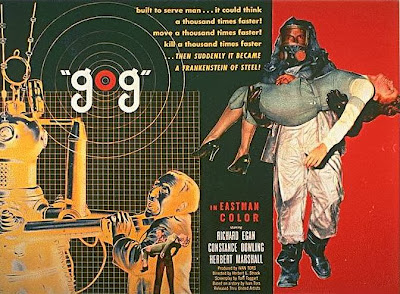 Perhaps we may reach the stage one day soon when we vow that in another sense, "We'll never be taken by surprise again!" and where we will all resolve to set our faces against the Gogs of our own making and declare, “no more, we are against you, Gog!” 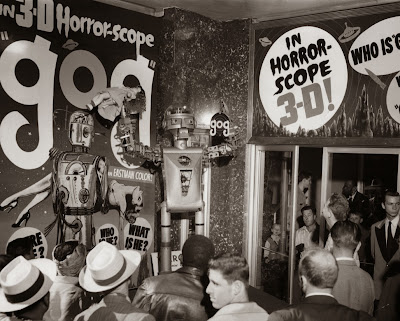