A Tribute to Marshall Thompson 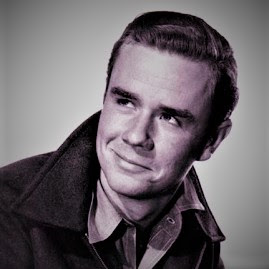 His father set up a successful Westwood dentistry practice. His mother even once took to the stage as a concert singer and musician. Marshall was their only child.

Thompson enrolled at Occidental College intending to become a dentist.

While in high school, Thompson appeared in a number of school productions and was spotted by a local talent agent, but this didn’t lead anywhere. At University High School he was a classmate of Norma Jean Baker, who we know by the name of Marilyn Monroe.

As far as acting went, Marshall Thompson was “re-discovered” while performing as one of the Occidental Players. 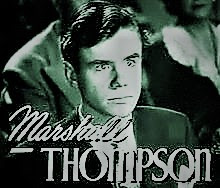 In 1943, Thompson was signed up by Universal Pictures where he went on to play quiet, thoughtful teen roles in feature films. He even scored a lead role playing opposite singing star Gloria Jean in Reckless Age for which he earned $350 per week.

In 1946 after being discharged from Universal, Thompson moved to MGM and had more frequent and superior roles in films such as The Clock and the lead in Gallant Bess, MGM's first Cinecolor film.

In the 1950s, Marshall Thompson became a freelance actor working for various studios. It was during this period that he appeared in science fiction films and TV series. 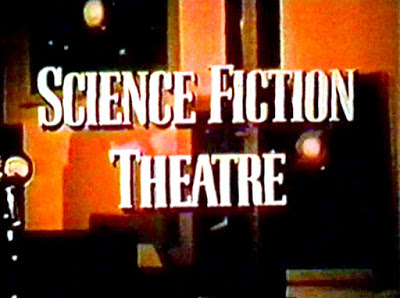 From 1955-6, Thompson appeared in seven episodes of “Science Fiction Theatre” on TV. The episodes include;

The Human Circuit: A nightclub dancer claims that she saw a nuclear blast during a seizure she suffered. It seems she had witnessed a top-secret bomb explosion in the Pacific. How to explain her clairvoyant talent scientifically?

Three Minute Mile: Dr. Kendall’s assistant, college student Britt has somehow acquired incredible strength and speed. Is this the result of experiments the doctor is conducting?

The Human Experiment: An enzyme from bees intended to help the mentally ill function in society has had some strange effects on a house full of patients.

Bullet Proof: A bank robber uses a piece of metal salvaged from an alien spacecraft to aid his thefts.

Stranger In The Desert: Two uranium prospectors locate a rich deposit along with a botanist who seems to have a strange motive. 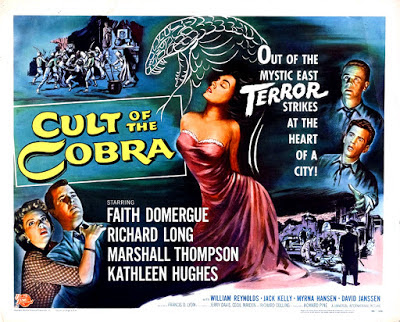 In 1955 Marshall Thompson starred with Faith Domergue, in Universal's Cult of the Cobra in which American G.I.s trespass on a Hindu ceremony and are hunted down by a beautiful woman who has the power to transform herself into a cobra! Thompson also appeared in this film with his brother-in-law, Richard Long. 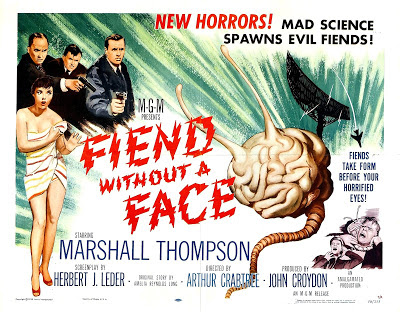 
In 1958 Thompson starred in the sci-fi thriller, Fiend Without a Face in which a scientist experiments with telekinetic powers that are enhanced by a nearby nuclear power plant and succeeds in creating a new form of life. This new creature manages to escape his laboratory and multiplies the closer it gets to its nuclear power source. 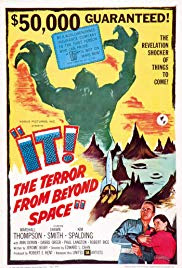 
In It! The Terror from Beyond Space (1958), Thompson plays Colonel Carruthers, the sole survivor of the first mission to Mars who is falsely accused of killing his fellow crew members on Mars. Carruthers claims that his crew were killed by a hostile Martian life form. While returning to Earth, the real monster behind the murders has stowed away aboard the rescue ship and begins hunting the crew as they return to Earth! The film's premise would inspire the plot for director Ridley Scott's sci-fi film, Alien (1979). 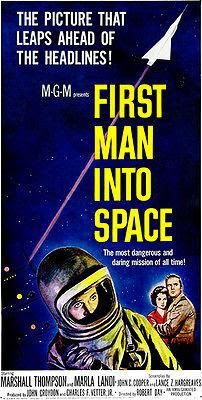 Then in 1959, Thompson starred as Commander Prescott in the sci-fi / horror film, First Man into Space in which his character’s brother, hotshot Navy test pilot, Dan Prescott takes the new rocket powered Y-13 plane up on its maiden test flight. Once he reaches the upper atmosphere, Dan disobeys orders and takes the plane further up into space where he encounters a strange cloud of meteor dust with terrible consequences for himself and many others.

Thompson also starred in the 1959 13-episodes syndicated science fiction TV series World of Giants in which the character Mel Hunter, a U. S. counter-espionage agent, is accidentally miniaturized to just six inches in height.

Apart from his appearances at that time in sci-fi and horror B-movies, Marshall Thompson had a couple of notable roles in To Hell and Back (1955) and East of Kilimanjaro (1957), in which he performed his own dangerous stunts and developed a lifelong passion for Africa and wildlife.

In 1960, Thompson guest starred as Arthur Poe in the Perry Mason episode "The Case of the Wayward Wife.". He also co-starred with the Belgian-born Annie Fargé in the 33-episode CBS sitcom Angel and later went on to star in two Vietnam War films: A Yank in Viet-Nam (1964) (directed by Thompson) and To the Shores of Hell (1965). 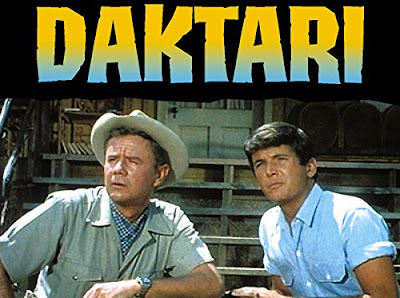 In 1965 he returned to MGM to play the lead for which he is probably best remembered in the film Clarence, the Cross-Eyed Lion (1965). Thomson played the character, Dr. Marsh Tracy, a veterinarian and single father, raising his daughter by himself in Kenya. The film led to a TV series spin-off called Daktari (1966–1969), in which Thompson played the same role opposite a lion and chimpanzee which served to make him a genuine household name. 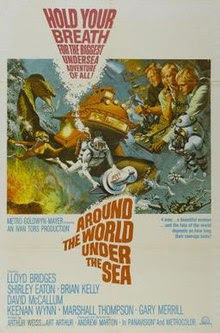 Marshall Thompson died in 1992 from congestive heart failure at age 66 in Royal Oak, Michigan and was survived by his wife Barbara Long whom he married in 1949, his daughter Janet, and grandson Jackson. 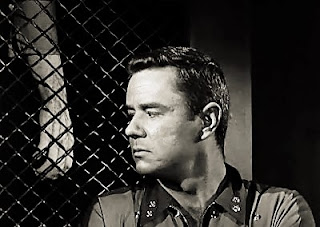 Posted by Chris Christopoulos at 23:16