The Monster That Challenged the World (1957) 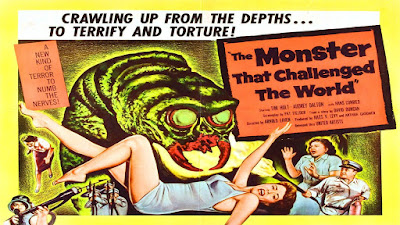 A somewhat predictable and formulaic sci-fi film which has enough action to hold audience interest for much of the 83 minutes viewing time.

Also known as The Monster That Challenged the World and in some quarters as The Jagged Edge and The Kraken. (“Release the Kraken!” Sorry, I had to say it!) 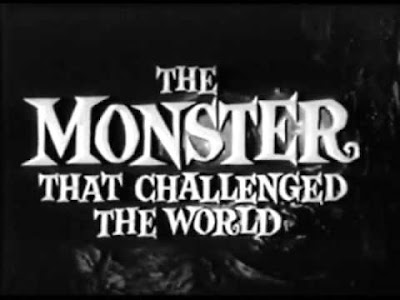 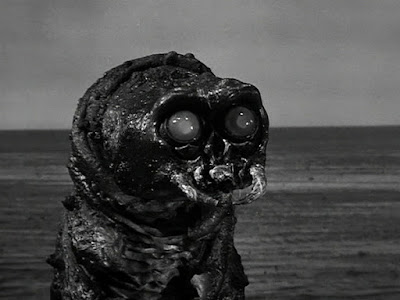 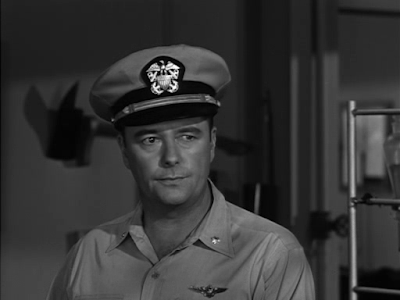 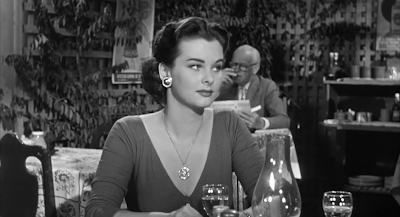 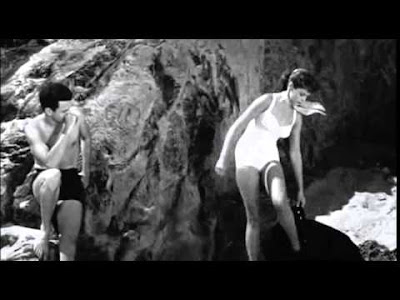 Total cooking time: 83 minutes. (Remember a watched pot never boils and this one will seem to take longer to cook than the time indicated!)

[In the opening sequence of putting together our sci-fi stew, we will attempt to mix in a kind of an unusual scientific phenomenon that defies our conventional notions of how Nature is supposed to work. If done correctly, these new laws or rules of nature will set almost immediately and remain so throughout the rest of the film.]


"This is the Salton Sea in Southern California. A strange phenomenon in which nature has placed 400 square miles of salt water in the middle of an arid desert. In the desert, close to shore of the sea, the government has established one of its most important Naval Research Bases. At the laboratory on the secluded south tip of the base, top secret atomic experiments are carried out under rigid security controls."

Tip: Don’t let the “Research” and “Atomic” ingredients put you off this dish. They are an essential component of any good sci-fi film stew. 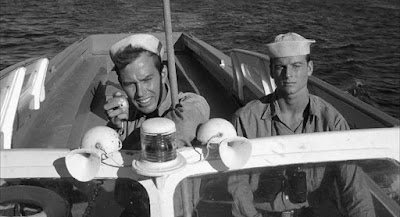 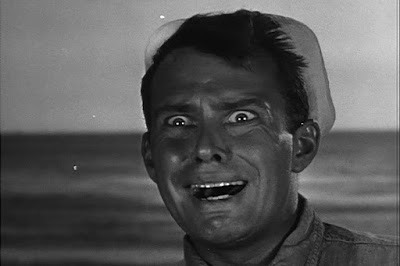 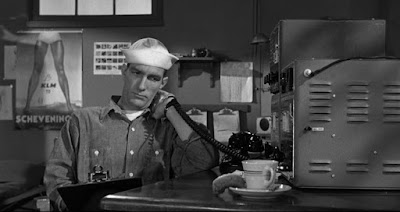 [At this stage of the process, you’ll be confronting the protagonist with a lethal consequence of this unusual scientifically unnatural phenomenon. The protagonist will be forced to realise something unnatural is going on and that it will have to be dealt with.] 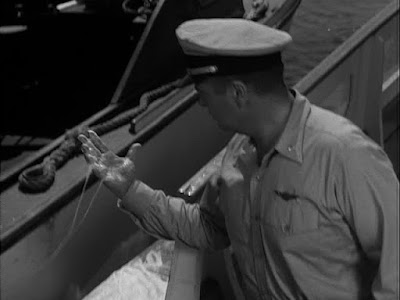 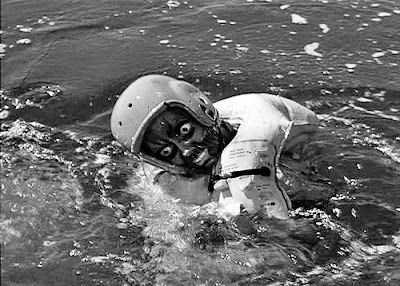 Tip: It is imperative that at this stage you have the sheriff quarantine the beaches!
It is also recommended that that George Blake notices that the white substance is radioactive. 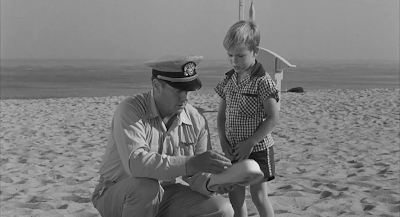 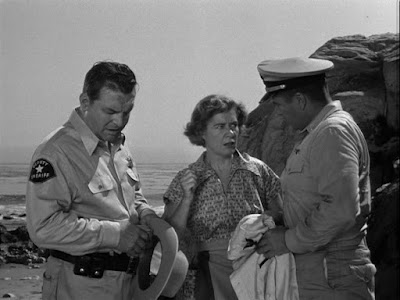 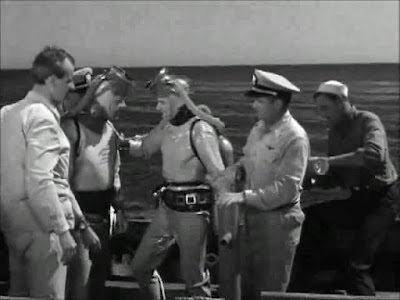 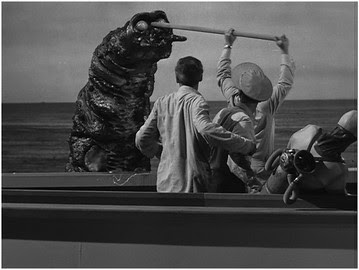 
[For this stage, the events are to lead toward a confrontation between the protagonist and the unnatural phenomenon or antagonist which threatens to destroy both the film’s hero and the world. You will have to work quickly here as the action rises and builds up to a final climax. Get it wrong and the sci-fi film stew will surely turn into a pot of runny slop!]

By now you should give thought to stressing the importance and magnitude of the threat that even one reproductively active creature could pose to the “entire world” if it gets into the All-American Canal.
Having done this, add the following ingredients needed to string out the audience with a series of high and low points in the plot:

7. the watchman at Lock 57 hearing something outside, assuming once again it is kids and being attacked by the creature when he investigates.
8. Twill and Dr. Rogers spotting from a helicopter a small lake with the white foam-like substance floating on the surface.
9. Twill diving with Dr. Johns and planting explosive charges near the shells of dormant creatures.
10. Explosions as the two divers ascend and make it to shore.

[Prior to putting your stew on to cook, top it off with a climactic battle in which the hero-protagonist vanquishes the creature.]

In this final stage,

Filming took place in 16 days with most of the underwater scenes shot at Catalina Island off the coast of Los Angeles. Close-ups were later filmed in a tank filled with water and plastic seaweed.

The film’s story is well-structured and the pace of the first half of the film is quite good. Thereafter, it does seem to drag on a bit until the final climax.

The special effects are reasonable for the time but are constrained by the film’s budget. Unlike many other films at the time, the creature in The Monster that Challenged the World appears to a mechanical or early animatronic model which looks more like something that resides in the bottom of my garden and feasts on my cabbages rather than a mollusc.


The rather loose use of the recipe format for presenting the film was undertaken in order to highlight some the limiting and restrictive aspects that conventional systems can have on the way we view the world and our place in it. Such systems may cover the arts, politics, education, science, economics and more.

To an extent, we need to have some order and structure and agreed methods and criteria with which to describe, categorize and explain existence, our world and the universe. How else can we expect to live, to survive or exist?

The problem arises when the systems (any system!) we create to achieve the above serve to restrict innovative, unconventional and radical thought and action by erecting walls of conservatism, convention, and orthodoxy. Only certain specified and approved ingredients are prescribed. Preparation and cooking time are predetermined and set. Only approved procedures are to be followed to the letter and not deviated from.

The end result of this is that we wind up having such things as films, literature and so on slotted neatly into genre boxes with the end product being conservative, predictable, formulaic and shallow. No matter where we are in the world, as we keep on slavishly following the recipes set down for us, before we know it our own thinking becomes conservative, predictable, formulaic, shallow and closed to other possibilities.

Sometimes you just need to rip up the recipe, gather your own ingredients, formulate your own method, share the results with others and……challenge the world! 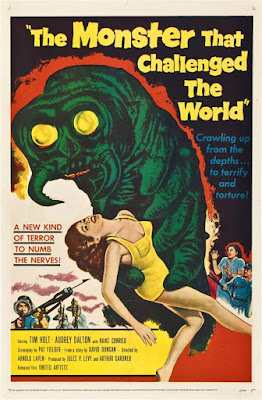