A Tribute To Whit Bissell 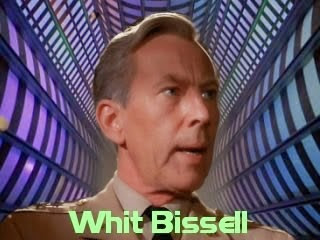 In Hollywood, Whit Bissell acted in thrillers, Westerns and science-fiction films. In his many supporting roles, he came to be that familiar face of credible authority, invariably appearing in the role of a doctor, scientist, or general in some science fiction B-movie or TV series.

His many science fiction, horror and other film credits include;


He also appeared in various episodes of such popular TV series as;

Whit Bissell managed to convey a sense of maturity, integrity, consistency and reliability as an actor who seemed to never tire of essentially playing the same part again and again.

There were, however, some memorable stand out roles for Whit Bissell. The other day I saw a solid but brief performance of his in the film, Brute Force (1949) starring Burt Lancaster. In this film, Whit Bissell played the part of one of Lancaster's cell-mates who was forced into taking his own life due to the cruel pressure placed on him by the sociopath prison guard captain.

Whit Bissell managed to leave behind a legacy that included some 300 film and television appearances. In 1994, he received a Life Career Award from the Academy of Science Fiction, Fantasy & Horror Films for his work with those genres.

Whit Bissell in Creature from the Black Lagoon