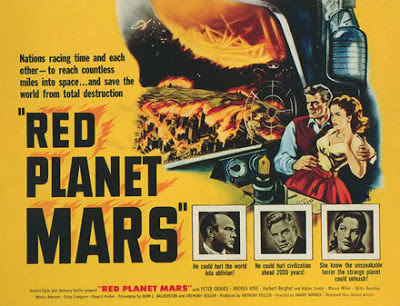 A film of its time
Cerebral
Certain aspects overdone 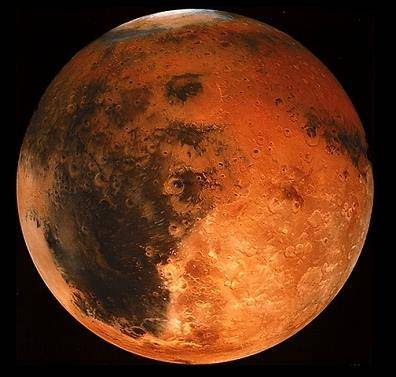 At a time “some years hence,” an American astronomer obtains photographic images of Mars suggesting large-scale manipulation of the Martian environment, supposedly by intelligent beings with advanced technology. This conclusion was arrived at by a comparison between pictures taken that night and another set taken a week before. On the photographs, it was discovered that there were “canals traversing the entire planet.” These ‘canals’ seemed to be reflecting “light like mirrors” which suggested that the inhabitants of Mars were melting the ice-caps to irrigate the planet. 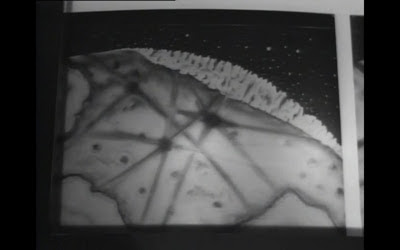 Meanwhile, a husband-and-wife team of scientific researchers, Chris and Linda Cronyn have been engaged in a project to send radio signals to Mars using a hydrogen valve developed by an ex-Nazi scientist. The Cronyns have been receiving signals which repeat their own transmissions and they have determined that these signals are not merely echoes bouncing off the planet’s surface.

The US government eventually gets involved in the form of Admiral Bill Carey who had cracked an important Japanese code during World War II. Carey’s role is to assist the scientists with developing a means of communicating in a meaningful way with the Martians.

It turns out that the scientists’ son is the one who comes up with the idea of using pi (geometry & mathematical concepts) as the language of communication. From this it is hoped that the Martians will realize that they are to continue with a particular sequence of numbers being transmitted to them and that they will reply with the appropriate sequence of digits. Chris Cronyn uses his son’s idea with successful results.

Linda Cronyn, however, does not see the endeavour to establish contact with an advanced Martian civilisation in terms of success. For her, the Martians could represent a significant threat to our own civilisation, especially when you consider that major technological advances on our own planet have resulted in social dislocations and a heavy price being paid with more efficient ways being conceived of slaughtering one another. For Linda, this opportunity for communication with an advanced civilisation would be far from being a “grandstand seat to the creation of the world.” Rather it could mean “its death.”

Meanwhile, in the Andes, a German scientist named Franz Calder (inventor of the hydrogen valve, former scientist under the Third Reich and convicted war criminal) is using a primitively equipped laboratory to try and contact Mars. Calder had been rescued from prison by agents of the Soviet Union. He was to be put to work for the benefit of Soviet interests and world power. Calder has tried to distance himself from his Soviet masters but he has not been successful in his isolated attempts to establish contact with Mars. However, he has been able to intercept all of the transmissions sent and received by the Cronyns. This ability will at least prove to be very useful to his Soviet masters.

Chris Cronyn arrives at the stage whereby he can ask the Martians some important questions such as;
How long do the Martians live for?
Answer: About 300 Earth-years
How do the Martians power their entire civilization?
Answer: By harnessing the energy of cosmic rays
Such questions and the answers they produce causes global political and economic chaos with panic affecting agricultural, coal, oil, and the electricity industries, all of which will probably be put out of business if the technology of the Martians is ever adopted on Earth.

This state of affairs is good news for the Soviets who consider the possibility of taking advantage of the social and economic crisis by immediately going to war with the West. That is until the next question posed to the Martians by Cronyn:
How, with all their advanced and powerful technology, have they managed to avoid destroying themselves with war?
Answer: War is an impossibility amongst the inhabitant of Mars because their planet is ruled………by God!
As proof of this revelation, they offer a quote from the Sermon on the Mount.

And what of this revelation from Mars?

Is it all just a hoax?
Do greed and self-interest and the accumulation of wealth become a thing of the past?
What implications are there for those living behind the Iron Curtain?
Will the Soviet Union experience popular uprisings?
Will the Soviet people who have been forced for decades to deny God now be free to embrace their religion?
Will the legacy of Lenin and Marx reside in the dustbin of history?
Or.....
Will everything that Linda Cronan had feared become a reality for all of humanity?

(Warning! There may be some spoilers beyond this point!)

Linda Cronyn’s assertion that “Albert Einstein split the atom.” is not really accurate since it was his work that made it possible to predict what would happen if the atom was split.

In 2013, it hasn't been all that long since many of us have been viewing our entertainment using a flat screen wall mounted TV. You'll notice that in the 1952 film, the Cronyn family use a flat panel wide screen set embedded in a wall. Check out the advertisement featuring a typical TV set from 1952 in my post, “Sci-Fi on Film and the Year 1952” and you'll see why the TV set in the film was a pretty good piece of prediction.

The eerie mood and atmosphere of the film is derived from the fact that neither the scientists nor we, the audience, actually see any Martians. We don’t go to Mars and no Martians try to invade the Earth. Instead, messages are exchanged between Earth and Mars in the form of a code which is displayed as flickering lines on a video screen. The flickering lines, flashing lights and monitors and electric sounds add to the eerie and alien nature of the mysterious beings from another planet.

Another great feature of the film, Red Planet Mars, are the plot twists by which we are led to believe that the ex-Nazi scientist, Calder, is the one who has been transmitting the `Martian' messages in order to trick the Americans and the whole world! As proof of his assertion, Calder suggests that the transmissions stopped at the time of his lab’s destruction by an avalanche. We are then taken through another twist in the plot and are confronted with a titanic struggle between the Cronyns’ preparedness to sacrifice themselves for the greater good and Calder’s hateful and vengeful attitude expressed by his assertion that it would be “better to reign in hell than serve in heaven.” 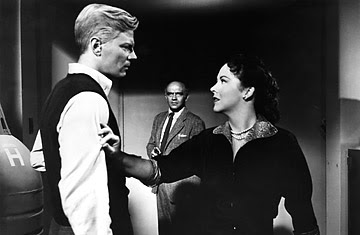 The two characters, Franz Calder and Arjenian are wonderful as the ex-Nazi scientist and Russian KGB agent respectively. They are both detestable in their own way, but you can’t help liking them as they bounce off each other and try to seek advantage over one another. For Arjenian, the Soviets “demand an accounting” for their investment, to which Calder replies, “you won’t harm me, you need me!”

There is one character, however, which really creeps me out! This is none other than Linda Cronyn. Her hysteria hits you like a sledge-hammer. Consider her reply to her husband’s contention that science has advanced us where she spits out at him, “and you’ll have done it!” and (off-screen in the movie and volume up high), “RIGHT INTO OBLIVION!” It is almost like Linda is a projection of the fear, hysteria and paranoia of the times. She frequently appeals to her husband, “don’t send a message tonight” and she feels as though “the whole world is scared” and that “fear has become a natural state.” Such sentiments are not surprising when you consider that the world of which speaks had not long before experienced the Great Depression, a truly global war and was then just coming to grips with the Korean war, a developing Cold War between the US and the Soviet Union and the internal insanity of the McCarthy anti-communist witch hunts.

Red Planet Mars encourages us to think about what happens when a technologically superior civilisation comes into contact with one that does not rely on advanced technology. Our history is littered with the tragic results of such kinds of contact including Australian Aborigines, South and Central American Indians and many African communities. Wholesale slaughter, decimation due to introduced diseases, destruction of religion and culture, theft of land; these have been the sad consequences of such cultural contacts and clashes. In the film, Red Planet Mars, as a result of the messages being received, it is little wonder that Earth's economy has begun to collapse with coal mines shutting down, resulting in the steel industry grinding to a halt and nervous people withdrawing money from banks as stocks plummet. The response to this situation is violence, social unrest, political instability and the declaration of martial law.

It is unfortunate that the film's Christian message is laid on rather too thickly with its many references to God and Christ. This feature of the film results in it taking on a particularly naïve, arrogant and blinkered view of the world and existence. The following are some of the examples from the film;
“God Speaks From Mars!”


On and on it goes. Such overloading of the film with religious, mainly Christian, messages tends to detract from its finer aspects. Instead, it seems to make it more like a poster film for the more lunatic elements of the American fundamentalist Christian right.

The overthrowing of the atheistic government in Russia and being replaced by a “nation finding its soul” and no longer sinfully “worshipping false gods” certainly has some parallels with what has taken place on the world stage in recent times. In the early 1990s we witnessed the fall of the communist dictatorship in Russia and the breakup of the former Soviet Union, along with a revival of Christianity in Russia. Rather than being the result of an overwhelming desire to embrace Christianity, it had a lot to do with a bankrupted Soviet Union being outspent by the West. Tragically, this in turn gave rise to the increasing influence of criminal groups and oligarchies, along with political corruption, social inequality and political repression!  Not exactly “following the star of Bethlehem!” It would have been far better to focus on a struggle against the enemies of freedom which resonates well across different eras and cultures and which is applicable to our real-life example above of the breakup and fall of the Soviet Union.

Like so many other science fiction films of the 1950s, Red Planet Mars is definitely a product of its time. It provides us with a fascinating glimpse of a period in the USA’s history where 'duck and cover' drills for kids, the 'red scare' and ‘reds under the bed’ menace and right wing paranoia were the order of the day. But what makes this film stand out from so many other films of this genre is that instead of relying on action and special effects, it does make you think and dare I say…..HOPE for something better! 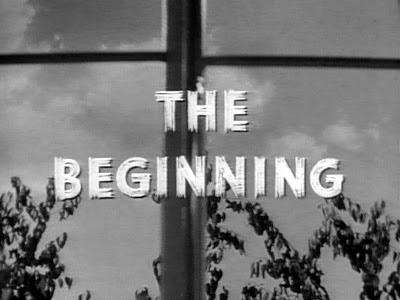