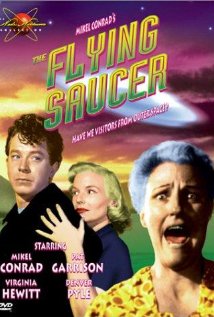 Taste of the Times

The era of the flying saucers & UFOs had well and truly begun.

Prior to 1950, Pilot Kenneth Arnold gave an eyewitness account in June of 1947 of strange saucer-shaped objects in the skies over the Cascade Mountains in Washington State.
Soon after reports surface of a flying saucer crash-landing at Roswell, New Mexico.

Conspiracy theories over alleged government cover-ups of this and similar events have persisted to the present day.

Many incredible inventions arose out of Nazi Germany’s desperation to avoid defeat and developed by the West in the post-war years. New and amazing jet airplanes and rockets (V1 & V2 rockets, me163 & me 262 rocket & jet aircraft) were being developed and were far more advanced than what the Allied nations possessed. Suggestions have recently been made of Nazi-era research into magnetic levitation and UFO-style aircraft development.

At the end of World War 2, Scientists from Nazi Germany were spirited away to both the former Soviet Union and the United States to work on various technological, military and other projects.

The era had begun whereby UFO sightings and reports of flying saucers would find their way into films as allegories of the Cold War.

The Cold War era for many in America was a time of fear of nuclear annihilation, Soviet invasion, another impending World War and the ever present threat of secret Communist / Soviet infiltration and subversion of the American way of life, freedoms and democratic ideals.


Who will get their hands on the saucer first?
Will Mike and Vee succeed in their mission?
Will the Soviets have a sure-fire means of unleashing the A-bomb on the US?

Join Mike and Vee as they travel across the scenic Alaskan wilderness in their patriotic quest of solving the mystery of The Flying Saucer …. 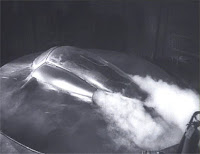 Mikel Conrad: Co-writer, producer, director and star of The Flying Saucer. He apparently claimed that he had filmed eight flying saucers landing and taking off forty miles from Juneau, Alaska. He also claimed that the film had been seized by the Air Force and that only a third of it was returned to him. Note that the title card at the start of the film thanked “those in authority” for making the release of the film ossible. The implication was that the film’s footage had been vetted before being cleared by government officials. The testimony of an FBI agent named McKnight, confirming the existence of the removed footage of the Alaskan saucers was exposed as being a part of an elaborate publicity and promotional stunt when the FBI agent was revealed to have been an actor friend of Mikel Conrad’s. The result was a public lashing in the media and personal hammering of Conrad’s reputation. Egotistical? Publicity-seeking? Self-promoter? Actor of little note? Some would say so and have said so. Still, here we are more sixty years later discussing a film that was the brain-child of one man. It was his film that was the first to make direct reference to the term “flying saucer” and use UFOs as its subject-matter. Despite the film’s faults and the shenanigans surrounding it, Conrad certainly left an interesting and contentious legacy.

What To Look For:


Effective shots of the saucer in flight and a good full-size version of it.

· Mike's old caretaker mysteriously disappearing and his "replacement," Hans constantly acting suspiciously around them. No need to concern yourselves, Mike and Vee!

· A total lack of sensible precautions (spy-type precautions!) being taken. Would anyone really yell, “SEEN ANY FLYING SAUCERS YET??” Or yell back in reply, “LOOK, MR TRENT, WE’VE GOT TO BE VERY CAREFUL WHAT WE SAY AND DO FROM NOW ON!!?” One would almost think they were doing it deliberately to smoke the Russians out. I doubt it though.

· Incompetent characters: Vee, an alleged professional cannot seem to control Mike and in fact falls for him. She does manage to get Dr Lawton but she also manages to steer him straight into a Communist cell’s trap.

· Who would wander about the Alaskan wilderness without a gun? “When you go out in the woods today YOU’RE SURE TO GET A SURPRISE….” Yes Vee, a bear!

· The Russians' inexplicable reluctance to dispose of their enemies, except for poor old Matt.

· Mike managing from an airplane “to spot a solitary cabin” (the right one too) in that entire wilderness!

· The failure of any bullets to penetrate Mike’s human shield’s body, or his own body.

The Ending: Pretty lame with Dr Lawton’s nonchalant chuckle and comment…. (You’ll see what I mean, reader!) The animal head trophy on the cabin wall didn’t stick around to find out. It decided enough was enough and disappeared halfway through the film! Will You?