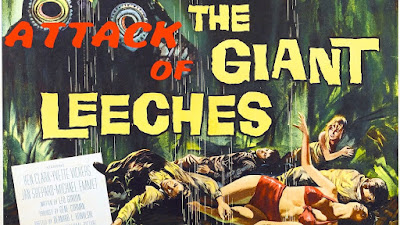 Set in the Florida everglades, local storekeeper, Dave Walker, is married to the much younger cheating Liz, who keeps on walking all over her older husband. Could her disappearance be the result of intelligent leeches living in an underwater cave? 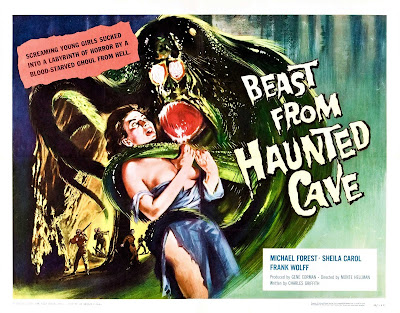 A group of criminals plan a heist involving the theft of gold bars from a bank vault in Deadwood, South Dakota. Their leader, Ward sends one of his henchmen, Marty Jones to set an explosion in a nearby gold mine to act as a diversion for the heist. Marty succeeds in setting off the explosion but encounters a beast in the mine. 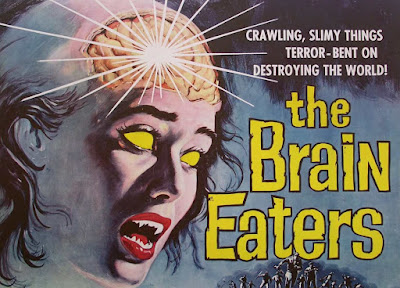 In Riverdale, Illinois, Senator Walter Powers is sent to investigate the origin of a mysterious five-storey-tall, metallic cone-shaped object which has suddenly appeared. The senator and a small team of scientists soon discover that an invasion is underway – an invasion by intelligent parasitic creatures from deep beneath the Earth! The creatures have infiltrated the town, taking control of the authorities and workers and making communication with the outside world impossible. Can Powers and the scientists prevent the impending total take-over of the town and possibly of the entire world? 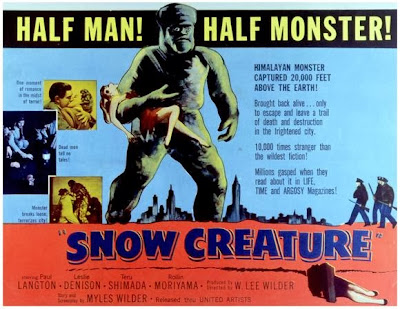 This was the first film to feature the apparently mythical Himalayan monster, the Yeti or Abominable Snowman. American botanist Frank Parrish puts together an expedition to the Himalayas with the aim of discovering some rare, new species of plant. Instead, he gets more than he bargained for when a Yeti targets his crew and decides to make off with his leading man’s wife. The aggrieved man, Subra forcibly takes over the expedition and leads the crew into the mountain wilderness to retrieve his wife. 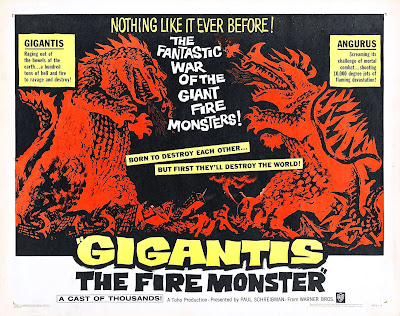 This film was a direct sequel to Godzilla designed to capitalize on Godzilla’s box office success. More importantly, it was the first film in the Godzilla series to feature a monster vs. monster theme, as Godzilla battled his first adversary, Anguirus. Godzilla would go onto battle other giant monsters throughout the rest of the series 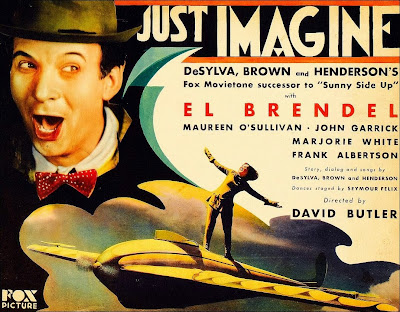 This film believe it or not is a 1930 science fiction musical comedy directed by David Butler. The film portrays New York City in an imagined 1980. A really unusual gem with some interesting special effects for the time. 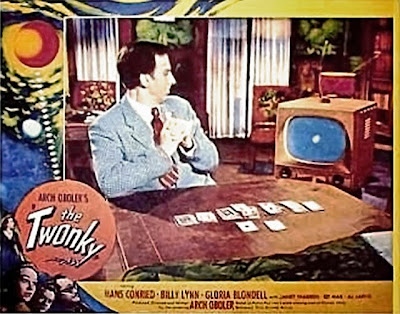 A dark sci-fi comedy with a commentary on the then relatively new piece of technology called television and how it can take control of people's lives. The TV walks around the house and acts like a personal servant by washing dishes and vacuuming. The “Twonky” however, soon begins to display some disturbing controlling behaviour. 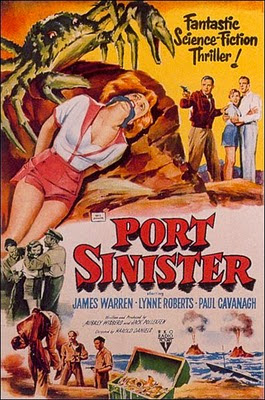 A scientist wants to investigate a 17th-century Caribbean pirate port which has risen from the ocean floor years after an earthquake submerged it under the ocean. Others, however, simply want the treasure rumoured to be stored there. Giant mutant crabs that live t
here have other ideas. 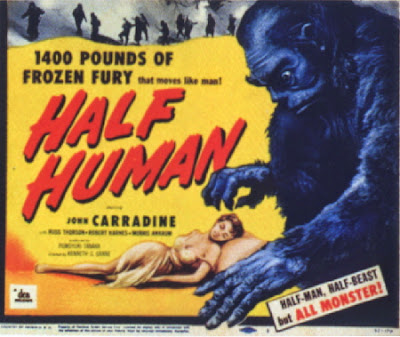 This is a story about Japanese villagers who worship a monster and his son who live in an island cave. Some circus people find out about this and decide to pay a visit to the island intending to capture the monster resulting in some pretty tragic consequences. The film is an American reworking of Ishiro Honda's Monster Snowman(1955) for Japan's Toho Studios. 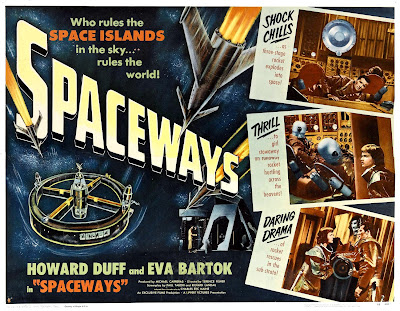 At Deanfield Space Centre, scientists working for the British space programme are employed on a project to launch the first rocket into stable orbit around the earth. This is a pre-cursor to the development of a permanent space station. On the day of the mission, the rocket launch goes well until the final stage when a malfunction occurs. Added to this we have romance, a failing marriage, a wife's infidelity and murder, a murder suspect and an investigation. 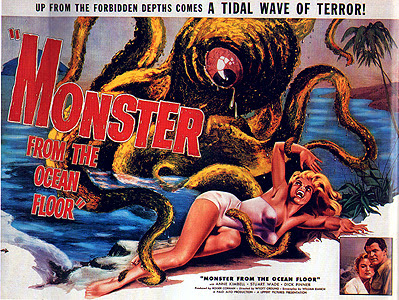 This film was Roger Corman's first solo production, starring Anne Kimball and Stuart Wade. While on vacation in a Mexican village along the Pacific coastline, Julie Blair falls for a handsome marine biologist, Steve Dunning. There's disturbing reports from the natives about a gigantic, one-eyed sea monster lurking off the coast, which they believe is responsible for a number of recent killings and disappearances. Steve dismisses the natives as superstitious and heads on farther down the coast conducting research. Julie, wanting to help alleviate the natives’ fears, remains behind to search for the monster oblivious to the fact that the natives believe that the only hope of bringing peace back to the village is the sacrifice of a "fair one" to …….the monster from the ocean floor. 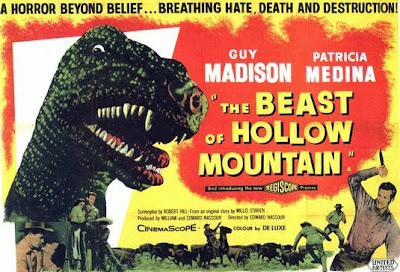 The film is a scifi western about an American cowboy living in Mexico who discovers his missing cattle are being preyed upon by an Allosaurus. Check out the beast’s crazy tongue action! 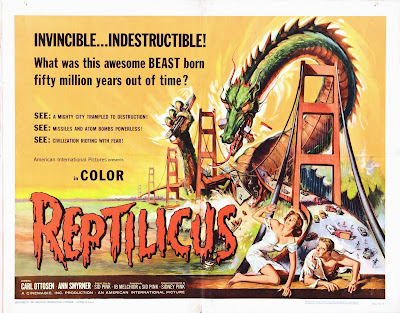 A Danish-American co-production, produced by American International Pictures and Saga Studios. It really comprises an original version shot in Danish (directed by Danish director Poul Bang and released in Denmark on February 25, 1961) and an American version (in English with a nearly identical cast, directed by the film's American producer-director Sidney W. Pink). After extensive reworking by the film's Danish-American screenwriter, Ib Melchior, this version was finally released in America in 1962 amidst lawsuit threats which were eventually dropped.

A 1960s Italian sci-fiim depicting the end of Atlantis & its highly advanced civilization of 20,000 B.C: "In 20,000 B.C...on the continent of Atlantis, now lost beneath the waters of the ocean, there lived a people who had developed an amazingly advanced civilization and who ruled all other people on earth... Obro, a man born in the east dared to probe the mystery of the city of death. His gigantic strength and courage were pitted against Yotar, the evil King, in a struggle to the finish...... When the scientists of Metropolis attempted to penetrate the secret of death, nature rebelled, causing universal destruction......love alone triumphed......and remained the sole source of life..." 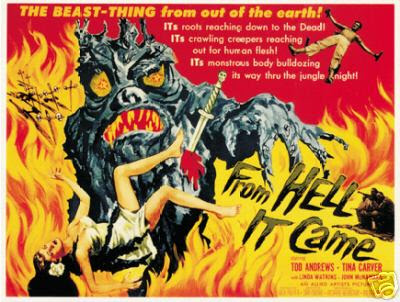 A wrongfully accused South Seas prince called Timo is accused of having betrayed his people by being responsible for the death of his father and is executed. He later returns in the form of The Tabanga, a killer spirit reincarnated as a walking tree stump, who seeks revenge on the  natives of a South Seas island. A group of American scientists do battle with the ill-tempered Tabanga.

I suspect that for many people, viewing this film may indeed feel like being in Hell! That woman with the "Aussie" accent! I'm an Aussie and I don't hear any women in my country talking like that, thank God! 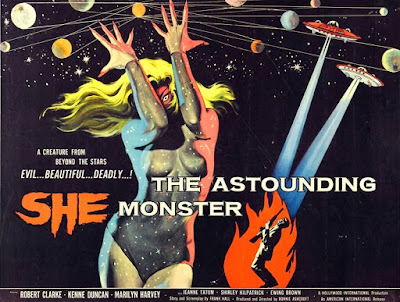 
The Astounding She-Monster is a 1957 science fiction horror film starring Robert Clarke and directed, written and produced by Ronald V. Ashcroft. In this film, a scientist and a gang that has kidnapped a rich heiress encounter and do battle with a beautiful but lethal alien who has crash-landed her spaceship on Earth 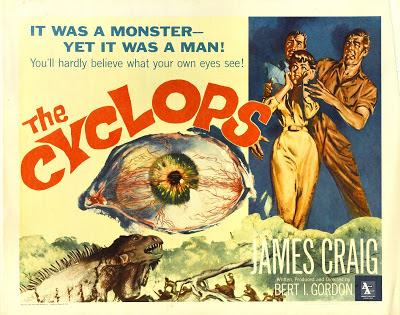 Test pilot Bruce Barton has been missing for three years. His girlfriend, Susan Winter organizes a search party to set out for the jungles of Mexico. The team consists of scientist, Russ Bradford, mining expert Martin "Marty" Melville and pilot Lee Brand. While searching the area that Barton went missing, they come across giant mutated creatures.

The team eventually encounter a mutated 25 foot tall, one-eyed human monster who was once normal-sized Bruce Barton. He has been exposed to radioactivity from massive radium deposits in the area.

Not exactly an Amazing Colossal Man (1957) or Dr Cyclops (1940), but there are worse ways to spend an hour or so. Not many though! 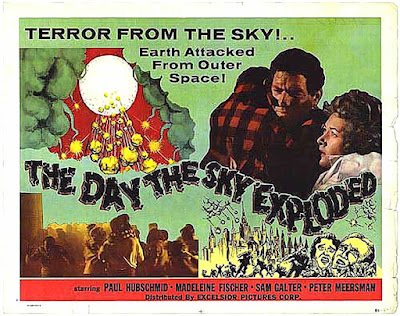 An atomic rocket on a manned moon mission malfunctions. After the pilot disengages the capsule and returns to Earth, the atomic booster continues on until it crashes into the asteroid belt and explodes.

Many asteroids are dislodged from their orbits as a result of the explosion and they then go on to form themselves into a huge cluster that is heading for the Earth.

The impending global disaster will be somewhat averted when the Moon passes in front of the cluster, thereby shielding the Earth from most of it.

A small portion of the cluster, however, is not shielded and is on course for the Earth!

With the approaching cluster, the earth experiences global upheavals ranging from tidal waves through to earthquakes. The only solution is to strike the cluster with a global nuclear missile barrage.

Will the plan work?


Will the earth be saved?

The Day the Sky Exploded is certainly not in the same league as When Worlds Collide (1951). It does, however, serve as a template for some interesting ideas for later films such as Deep Impact (1998) and Armageddon (1998). 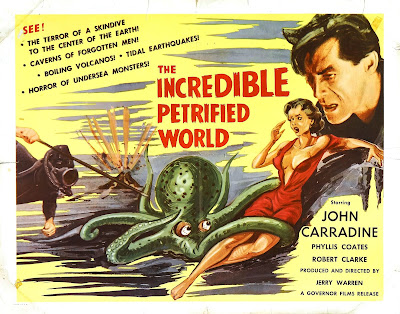 
Four members of an expedition descend to the depths of the ocean in a diving bell when suddenly the cable attached to their diving bell snaps. While their colleagues on the surface believe them to be lost, the four survive the mishap and exit the diving bell, only to find themselves in a network of underwater caverns. However, they are not alone…… 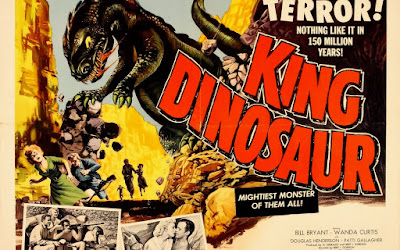 A new planet dubbed “Nova” enters our solar system and four scientist / astronauts are sent to explore the new Planet Nova. The crew land and begin studying the planet to see if it's suitable for Earth colonisation. At first, they discover Earth-like animals but soon encounter giant insects and prehistoric reptiles on a mysterious island. Drastic measures will be needed to deal with the threat posed by the dinosaur inhabitants of the island! 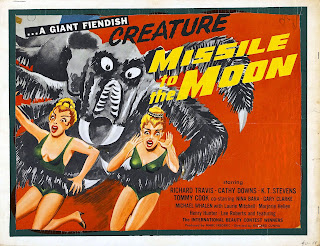 Scientists Steve Dayton and Dirk Green are disappointed when informed by government officials that their private moon-missile project is to be placed under armed-forces control. Dirk Green is convinced he can take the rocket to the moon successfully. Two escaped convicts, Gary and Lon are caught hiding in the rocket by Green who forces them to help him pilot the ship to the moon. Dirk's partner, Steve Dayton and his fiancé, June accidentally manage to stowaway on the ship when they came looking for Green. The truth about Green, a giant spider and lovely green-skinned ladies await the intrepid crew. But will they make it back to Earth safely? Watch this totally undemanding Catwomen of the Moon rip-off (in colour!) and find out!