For now, we’ll set aside what many people consider to be the vile use of military drone technology by governments for the purposes of violating other nations’ sovereignty to carry out state-sanctioned extra-judicial assassinations that often result in “collateral” damage.

For the purposes of this post, consider a scenario that was presented in a sci-fi film called, Runaway (1984) starring Tom Selleck who plays a police officer who specializes in malfunctioning robots. He soon finds himself uncovering a plot involving the programming of robots to kill. In one scene he investigates a suburban home where the domestic robot has become homicidal. One of his tools is a small drone which he sends into the house to provide him with video surveillance of what is taking place. Don’t forget that what is commonplace today was being depicted (predicted?) 34 years ago as part of the police force’s arsenal of surveillance tools. 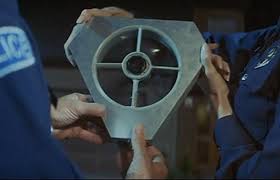 
Fast forward to 2018 and we have reports of a “leading defense expert” proclaiming that the use of artificially intelligent drones to monitor crowds at major events and report "irregular behaviour" to authorities will become widespread.

Meanwhile in Australia, Victoria Police have disclosed plans to use such drones as part of its new counter-terrorism strategy. The drones possess biometric features within their cameras that look for patterns of behaviour and can detect "unusual behaviour" in a crowd. The drones will then report findings back to officers, who can then investigate the potential threat.

The question to consider is whether such a course of action will simply add yet another layer to the ever-expanding reach of the cctv saturated "surveillance state?" Not to mention the fact that the simple private and domestic use of drones has raised concerns about the abuse of this technology by those who try to clandestinely pry into other people’s lives and invade their privacy!

It is difficult to argue against the use of drone surveillance technology when the stated intention of its deployment is to protect the community. However, that does not mean that it should not be questioned and even prevented from being implemented should the use of such technology diminish people’s right to privacy and their personal freedoms.

Take for instance the notion of “irregular behaviour.” What constitutes unusual behaviour? Who determines what is unusual, abnormal or irregular behaviour? Should such determinations be left to artificial intelligence? Would such monitoring lead to perfectly innocent people being identified and singled out? Would people fall into the habit of constantly self-monitoring their movements, actions and interactions with others? Could this behaviour identification eventually be extended to profiling of individuals and groups?

It is certainly true and not surprising that terrorist and militia groups have begun to employ weaponized drone technology. It has been reported that certain groups in Iraq have used drones equipped with grenades during battles. We can also not forget the apparent assassination attempt by means of a drone of the Venezuelan President Nicolás Maduro during a speech at a military parade on Aug. 4. 2018

Drones are becoming more cost-effective for governments and the military but the same also applies for terrorist groups. Before we know it, we’ll end up having a world living in constant fear of death raining down from the sky at any time and place!

Added to that scenario, is the ever increasing reliance on artificial intelligence to make decisions, extending even as far as one day making ethical and moral decisions.

It is a worrying fact that the community has been somewhat lulled into a degree of complacency when it comes to the increasing use of surveillance by CCTV cameras. Playing on our concerns about our security and safety could also lead us to become more accepting of the use of drone surveillance technology as well. Will we also be prepared to live our lives nervously looking over our shoulders and up at the skies in between being transfixed by our screens?

Posted by Chris Christopoulos at 00:08